A Russian oligarch has begun targeting British police officers after protesters broke into his London mansion.

The Russian oligarch is by Oleg Deripaska, and his mansion is located in a luxury residential area in central London. According to reports, activists broke into the mansion located in Belgrave Square on Monday around 1 AM. The four individuals who climbed onto the mansion's balcony came down around 8 PM Monday night and were arrested by authorities.

Larisa Belyaeva, a spokeswoman for Deripaska, said that the Deripaska family was "appalled at the negligence of Britain's justice system shown by Boris Johnson's cabinet in introducing the sanctions and colluding with the sort of people who raid private property." These comments come after the United Kingdom laid heavy sanctions on Oleg Deripaska following Russia's invasion into Ukraine.

BusinessInsider has reported that when it visited the property, it saw activists on the balcony holding a sign that read "This property has been liberated", while also chanting "free Ukraine". 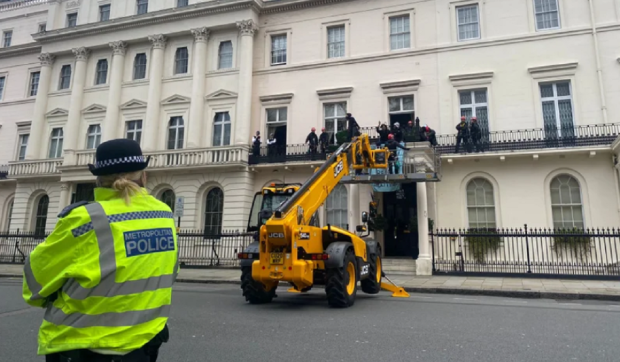