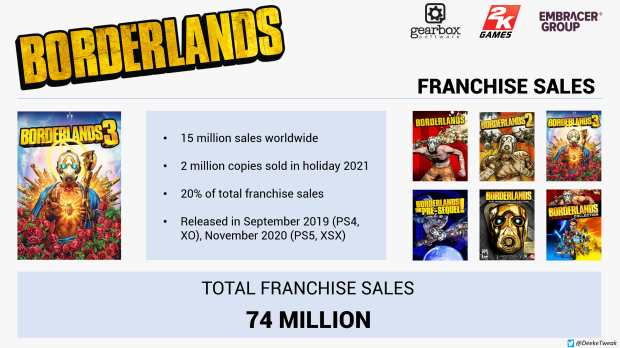 Cross-play might be thee most important new feature of modern gaming, especially for titles with live services and microtransactions. Borderlands 3, which ahs sold 15 million copies, is one such game. Borderlands 3 didn't launch with cross-play on gaming's biggest platform--the PlayStation 4. That should change soon.

"Borderlands 3 has supported cross-play for some time. The future addition of PlayStation to cross-play forr BL3 is now what I would consider to be inevitable. More info to come as soon as we have it," Pitchford said.

So why has cross-play been left out? Speculation asserts that it's because of Sony's cross-play tax that required publishers to pay extra to enable the feature, and pay Sony a certain fee if gamers bought more items from other non-Sony platforms. For example, someone could play Borderlands 3 on PS4 and Xbox, and if they bought more items on Xbox, it could trigger a fee.

In May 2021, Pitchford confirmed publisher 2K Games had forced Gearbox to pull cross-play. Details were slim but everyone suspected it was due to the infamous cross-play fees.

"Good news or bad news first? Good News: An update for Borderlands 3 has been prepared for release that includes full cross-play support across all platforms. Bad News: For certification, we have been required by the publisher to remove cross-play support for PlayStation consoles," Pitchford said at the time.

Gearbox's latest game Tiny Tina's Wonderlands will ship with full cross-play on PlayStation, Xbox, and PC, so it's clear 2K Games has reached some sort of deal with Sony on the matter.