Gamers are known for pushing the envelope on how to game, from speedrunning to insane challenges such as completing a game with a dance pad.

A streamer that goes by SuperLouis64 has decided to take a strange but extremely interesting approach to Elden Ring, instead of going with a traditional controller setup SuperLouis has opted for eleven bananas hooked up to a makeshift circuit board. Each of the bananas is mapped to individual inputs, so when SuperLouis wants a certain input to occur, he presses the button on the corresponding banana. Additionally, the streamer was able to get the banana setup to work with a PS4 controller.

The streamer is no stranger to modified controller setups and has previously beaten Halo 3 on Legendary difficulty with a Guitar Hero controller and beaten Dark Souls with the controls of Ring Fit Adventure. In the above video, SuperLouis beats Godrick the Grafted, the ruler of Stormveil Castle and the final boss within the area. If you are interested in reading more about this story, check out this link here. 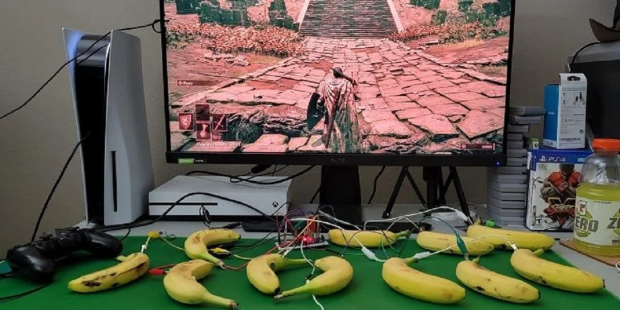