Russia continues its advance into Ukraine, and as Russian troops move deeper into the country, they are encountering Ukrainian forces in places they wouldn't expect.

Recently, Maxar Technologies, a US Observation Company that operates satellites, published images of Russia's military convoy that stretched some 40 miles. Included in that convoy were Russian tanks and various other vehicles that were/are traveling towards Kyiv. SkyNews has verified footage captured by a drone that shows an "ambush" of a Russian military convoy of tanks moving towards Kyiv, Ukraine's capital.

The footage shows around twenty vehicles, most of which are tanks and one personnel carrier parked stationary on the road in a village close to Kyiv. The drone observing the stationary convoy then captures a projectile being shot at a personnel carrier, followed by more fire from Ukrainians in the surrounding buildings. The Russian convoy retreats while still under fire back down the road in the direction they came from. 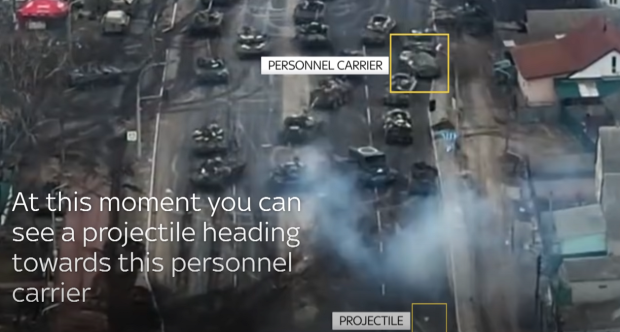