An indie game mega bundle has raised more money for Ukraine relief than any other video games company. 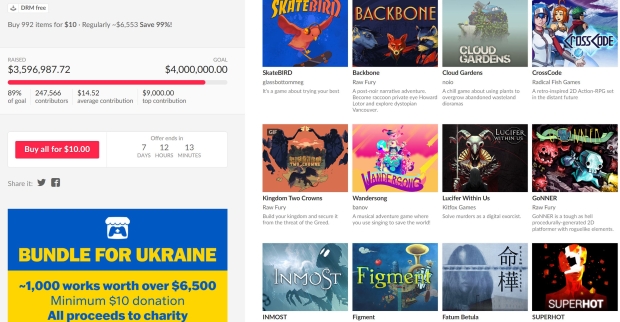 The Bundle for Ukraine packs nearly 1,000 games and has raised an incredible $3.59 million for humanitarian relief in Ukraine. The collection includes some pretty choice games including popular titles like Celeste, Superhot, Jotun, and two Towerfall games, but it also has other media like tabletop RPGs comics, ebooks, and even some tools. Over 700 developers and creators have joined forces to make the bundle a reality.

"The people of Ukraine are under attack. As game developers we want to create new worlds, not to destroy the one we have. That's why we've banded together to present this charity bundle to help Ukrainians survive this ordeal and thrive after the war ends."

I can wholeheartedly recommend this bundle not only for the breadth of content it offers (see the list of notables below) but it's also for a great cause.

The Itch.io Bundle for Ukraine includes (but is not limited to):