All NewsBusiness, Financial & LegalCases, Cooling & PSUContests & GiveawaysCPU, APU & ChipsetsDealsDisplays & ProjectorsGamingMotherboardsScience, Space & RoboticsStorageVideo CardsVirtual & Augmented Reality
All ReviewsAll ArticlesAudio, Sound & SpeakersCases, Cooling & PSUCPUs, Chipsets & SoCsComputer SystemsDisplays & ProjectorsGamingMotherboardsNetworkingPeripheralsRAMStorageVideo Cards
GuidesGamingAsk the ExpertsNewsletterAboutForums
RTX 3090 TiRTX 4090Diablo 2GTA 6Halo InfiniteElon MuskRTX 3080HDMI 2.1
CPU, APU & Chipsets
It appears that Sony did indeed change the CPU in the new 40GB version of the PS3 to a 65nm chip after all, despite what you might've read earlier. It took a while for Sony to admit to doing so, but Kazuo Hirai, the president of SCEI came clean and said that the Cell Broadband Engine in the 40GB model is indeed produced using a 65nm process.

The story started in Japan with some journalists noticing a much lower power usage of the 40GB model, although Sony did initially deny that there were any new chips in the latest revision of the console. However, now the company has come clean and although the Cell processor has had its die shrunk, the RSX graphics chip remains at 90nm. 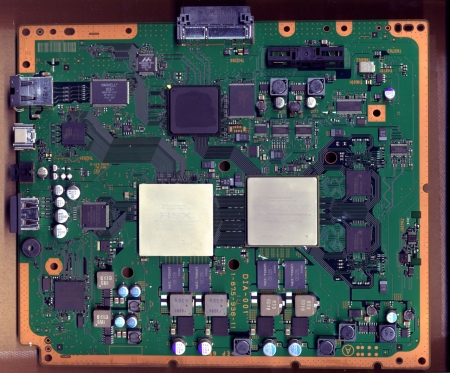 The picture above is of the new motherboard which is missing the Emotion Engine of the PS2 which the 20 and 60GB models came with. There are plenty of pictures on how to disassemble the PS3, although PC Watch isn't suggestion you should do so, as it'll void your warranty. The PS3 looks quite different from the Xbox 360 internally, which shows that it has nothing in common with a PC, unlike the Xbox 360 which has borrowed heavily from the PC platform.

You can find a babelfish translated link of the PC Watch article here and there are loads of pictures to have a look at if you want to see more of the internals of a PS3.
Newsletter Subscription