According to the ESA, solar prominences are "large structures of tangled magnetic field lines that keep dense concentrations of solar plasma suspended above the Sun's surface." They are commonly associated with coronal mass ejections (CMEs), which can disrupt technology and life on Earth if directed towards us.

The CME from the February 15th event is traveling in the opposite direction to Earth, originating on the side of the Sun facing away from Earth. While the Solar Orbiter did not witness the eruption on the Sun's surface, its Full Sun Imager (FSI) and Extreme Ultraviolet Imager (EUI) instruments allowed it to capture the solar prominence as it extended millions of kilometers beyond the Sun in the satellites field of view.

While other satellites like the ESA/NASA SOHO satellite and NASA's Parker Solar Probe observe the Sun, they may be too close to see the full Sun or so far away an occulter blocks detailed imagery. The recent prominence observed by the Solar Orbiter "is the largest ever event of its kind to be captured in a single field of view together with the solar disc." 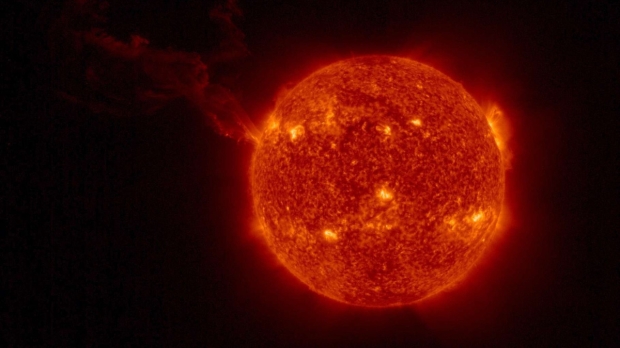