All NewsBusiness, Financial & LegalCases, Cooling & PSUContests & GiveawaysCPU, APU & ChipsetsDealsDisplays & ProjectorsGamingMotherboardsScience, Space & RoboticsStorageVideo CardsVirtual & Augmented Reality
All ReviewsAll ArticlesAudio, Sound & SpeakersCases, Cooling & PSUCPUs, Chipsets & SoCsComputer SystemsDisplays & ProjectorsGamingMotherboardsNetworkingPeripheralsRAMStorageVideo Cards
GuidesGamingAsk the ExpertsNewsletterAboutForums
RTX 3090 TiRTX 4090Diablo 2GTA 6Halo InfiniteElon MuskRTX 3080HDMI 2.1
Video Cards
At a visit to Gigabyte's office in Taipei yesterday, we had the chance to take some pictures of Gigabyte's upcoming 780i SLI board and it looks like it's just about ready to enter mass production. The GA-780SLI-DS5 isn't the top of the range version, but it still has a wide range of high-end features.

If you're an avid reader of TweakTown you might remember that we posted a picture that we found online of this board a few days ago and apparently the designs are slightly different between the two which is really odd. You can find the previous news post here. If you compare the two you'll notice that the heatsink is quite different, although, we were told by Gigabyte that the one on the board we saw is likely to change and it is most likely going to extend to the south bridge. 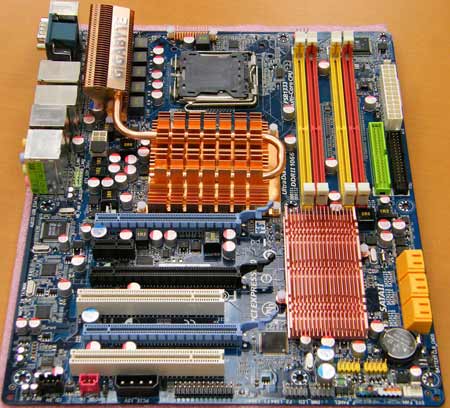 As with all 780i boards, only the blue PCI Express x16 slots are PCI Express 2.0, due to the fact that it's the N200 controller that adds PCI Express 2.0 functionality. In addition to the three x16 PCI Express slots, there's a single x1 slot and two PCI slots. However, if you're running three-way SLI, all the other slots will be blocked. 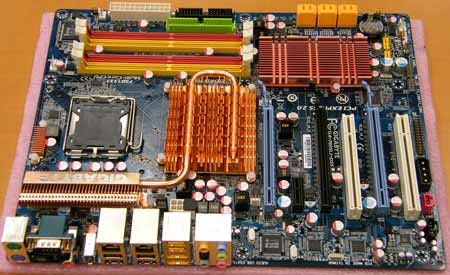 We also got a shot of the rear of the board and it looks like Gigabyte has changed the rear I/O layout on this one. The board will have two PS/2 ports, a serial port, optical and coaxial S/PDIF out, FireWire, dual Gigabit Ethernet, eight USB 2.0 ports, two eSATA and finally 7.1-channel audio jacks. There's also six SATA ports, all angled at the edge of the board and a single IDE and floppy connector just above them.

Gigabyte didn't give us a firm release date of this board, but it's not too far away.
Newsletter Subscription