SpaceX has been working on Starship, the biggest and most advanced rocket ever made, for quite some time, and now SpaceX's CEO Elon Musk is showcasing how the company may catch the rocket on its descent back down to Earth.

As with all of SpaceX's rockets, they must be reusable as the reusability of its rockets is the company's main attraction as it saves millions in manufacturing rocket parts after every launch. SpaceX is already leading the reusable rocket industry with its workhorse rocket, the Falcon 9, and while that rocket can certainly get the job done when it comes to ferrying satellites and astronauts into low-Earth orbit, it doesn't quite cut it for an attempt on reaching Mars.

This is why SpaceX is building Starship, the largest and most advanced rocket ever created. Starship stacked on top of SpaceX's SuperHeavy Booster stands at a whopping 390 feet tall and will output up to a total of 7,600 tons of thrust at liftoff, which is more than double the power of a Saturn V rocket. As for how much it can carry, Starship will be able to carry between 100 and 150 tonnes to orbit and about 100 tonnes to Mars.

The video posted to Musk's Twitter account shows a computer simulation of Starship descending and being caught by two arms coming out of Starbase, the platform where Starship will be launched. 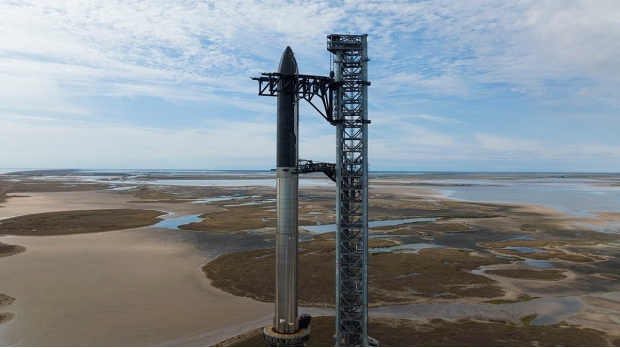