Samsung is dominating the foldable smartphone market, but that doesn't mean Apple is sitting on its hands -- it may be busy building its game-changing AR headset -- but foldable iPhone, yeah... it's coming.

In a new concept by designer Antonia DeRosa, we get a glimpse of what Apple could surprise us with when the company reveals its foldable smartphone -- which DeRosa calls the iPhone Air -- sometime in 2023 and beyond.

Inside of the new concept iPhone Air, we'd find Apple's latest M1 processor and a design that mimics Samsung's current Galaxy Z Flip 3 foldable smartphone. The concept iPhone Air has a clamshell-style design, with chrome hinges and that typical Apple iFlair. There's a secondary display, just like Samsung's two current foldable phones, which would have notifications and other apps when the iPhone Air is unfolded. 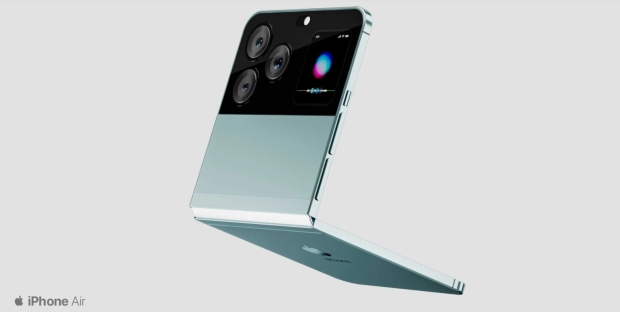 On the outside, the Apple iPhone Air concept smartphone has very Apple-like aehsethics but with a pill-shaped cutout for camera and Face ID components. When it comes to the hinge, the hinge is chrome and has an Apple logo when the iPhone Air is closed shut.

Apple isn't expected to launch its new foldable iPhone until 2023.