A blog post from a UFO expert has recently gained traction online as he claims that NASA's Perseverance rover has captured an image of life on the surface of Mars.

The photograph of the alleged "life" comes from a panorama image that NASA's Perseverance rover snapped by in April 2021. According to Scott Waring of the blog UFO Sightings Daily, the photograph is a "person laying down watching the NASA Mars rover from a safe distance away", adding that the person is "1 foot tall and is laying down, pinkish upper chest, neck and face, radish hair, wearing a dark suit, but has a grey object over one shoulder...looks like a backpack of some sort. There are even footprints behind the person leading up to the location they chose to lay down at."

Despite a complete lack of evidence for the claims, the post from Waring gained traction online and was shared around bunch. So, did NASA's Perseverance rover accidentally capture a still image of life on Mars? The short answer is no, and there are a few simple reasons why. The surface of Mars is inhospitable to life as it contains no water and only traces of oxygen, meaning that no life can exist on its surface, not even microscopic life. 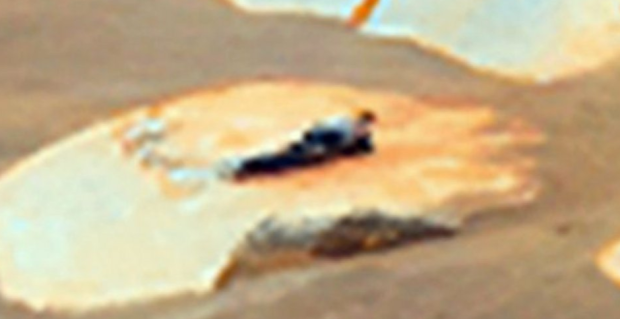 "While it is conceivable that microscopic forms of life could exist, probably deep in the subsurface in areas where temperatures could be more moderate, the overlying rocks shield the environment from much of the radiation, and liquid water could exist, we have not found any evidence to date of extant life of any form on Mars," said Mitch Schulte, a Mars 2020 program scientist at NASA's headquarters in Washington, D.C. to Newsweek. 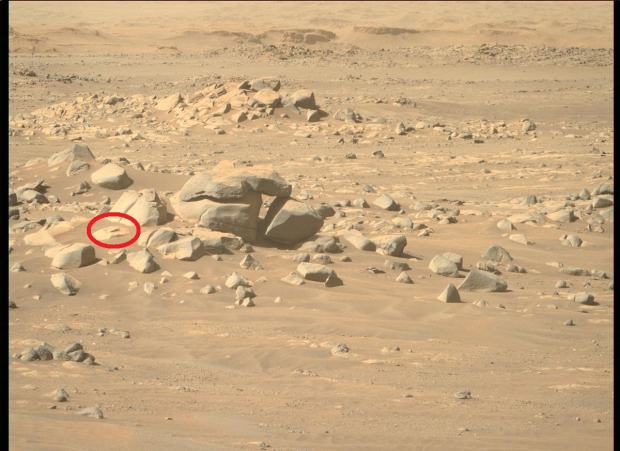 Original image with red circle around the "person".

This isn't the first time that something has seemed strange when observed from far away, as only recently a mysterious "house" was photographed on the Moon, but after being approached by rover, it was discovered it was just a rock. The story of the sun-baking alien on a Mars rock seems very similar to the story of the "house" on the Moon - filled with hope of humans not being alone in the universe.