The Parker Solar Probe has captured the first images of the Venusian surface using visible light. Normally the planet's surface is obscured by thick cloud cover, but recently the probe was able to use its Wide-Field Imager (WISPR) to image the nightside of Venus in the same wavelengths that the human eye can perceive.

"Venus is the third brightest thing in the sky, but until recently we have not had much information on what the surface looked like because our view of it is blocked by a thick atmosphere. Now, we finally are seeing the surface in visible wavelengths for the first time from space," said Brian Wood, lead author on the new study and physicist at the Naval Research Laboratory in Washington, DC.

The Parker Solar Probe took the first of these images in July 2020, as it made its third flyby past Venus to bend its orbit closer toward the Sun. With the capability of resolving fine detail in the solar atmosphere, scientists decided to examine the Venusian clouds but were surprised to see the planet's entire nightside as well. The camera observed a faint glow coming from the planet, as WISPR also captures some infrared wavelengths, which the planet radiates due to its extremely hot surface, about 860 degrees Fahrenheit even on its nightside.

"We're thrilled with the science insights Parker Solar Probe has provided thus far. Parker continues to outperform our expectations, and we are excited that these novel observations taken during our gravity assist maneuver can help advance Venus research in unexpected ways," said Nicola Fox, division director for the Heliophysics Division at NASA Headquarters. 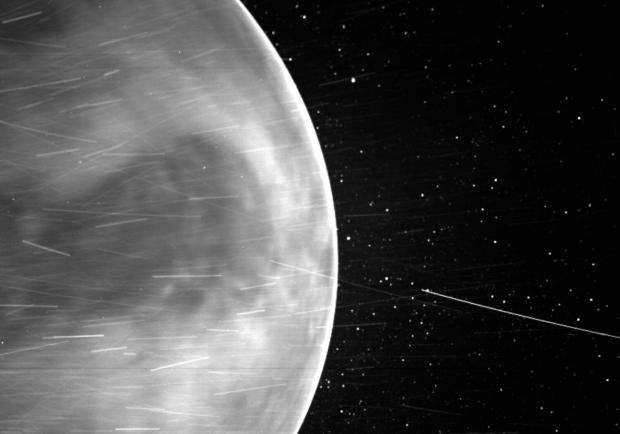