Researchers have found unexpected elements in the atmosphere of a neighboring white dwarf star and have suggested that they could have come from a recently consumed dead planet. 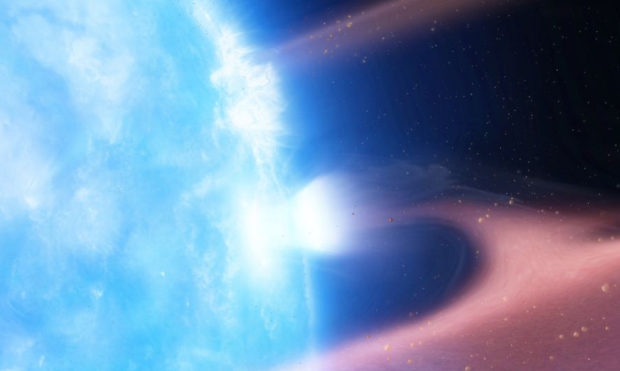 The new study published in the journal Nature details a white dwarf star called G29-38 that's located 50 light-years away from Earth within the constellation Pisces. White dwarf stars are the cores of once-living once stars such as the Sun. These celestial bodies are extremely dense, with a surface gravity about 100,000 times stronger than Earth's.

Due to the extreme gravity, any heavy elements, such as iron, calcium, and magnesium, sink beneath the surface of the star relatively quickly, meaning that detecting any would suggests an event occurred recently. Researchers used NASA's Chandra X-ray Observatory to hone in on G29-28, isolating the white dwarf's X-ray signature and detecting approximately 1,800 tons of matter being sucked into the white dwarf every second. This observation marks the first time researchers have isolated X-rays emitted by a white dwarf.

"White dwarfs are extremely dense objects, and have a surface gravity about 100,000 times stronger than on Earth. This causes heavy elements to sink out of sight on very short timescales. This means that the observed heavy elements at the surface must have recently arrived from outside the white dwarf," said study lead author Tim Cunningham, an astrophysicist at the University of Warwick in England, to Space.com.

"Measuring how much and how quickly remnant planetary material falls onto the surface of a white dwarf has many important implications, including for planet formation and exoplanetary material compositions," said Cunningham.

"The exciting thing with our X-ray detection is that we are detecting emission from the moment this planetary debris hits the stellar surface, providing the first direct evidence that these systems are currently accreting," said Cunningham.