NASA's newest Mars rover named Perseverance is a very sophisticated piece of technology and is currently collecting rock samples for a long journey back to Earth.

Unfortunately, Perseverance isn't able to send back Mars samples, but NASA has a plan, and it involves a rocket being launched from the surface of Mars. NASA has dubbed the mission "Mars Sample Return Program," and according to the space agency's recent announcement, it has tapped Lockheed Martin to construct the first rocket to do a round-trip mission to Mars to pick up samples.

Lockheed Martin will construct the Mars Ascent Vehicle (MAV), which is a small, lightweight rocket that will launch from the surface of Mars. NASA's plan is for the Sample Retrieval Lander (SRL) to take the Mars Ascent Vehicle to the Red Planet's surface, where it will land relatively close to Perseverance. The SRL will act as a launch platform for the small MAV rocket, which will be shot up into orbit and the payload caught by the European Space Agency's Earth Return Orbiter.

NASA plans on the Mars samples returning to Earth sometime in the mid 2030's.

"This groundbreaking endeavour is destined to inspire the world when the first robotic round-trip mission retrieves a sample from another planet - a significant step that will ultimately help send the first astronauts to Mars," NASA administrator Bill Nelson said.

"We are nearing the end of the conceptual phase for this Mars Sample Return mission, and the pieces are coming together to bring home the first samples from another planet. Once on Earth, they can be studied by state-of-the-art tools too complex to transport into space," said Thomas Zurbuchen, associate administrator for science at NASA headquarters.

A more in-depth explanation of the entire process can be found here. 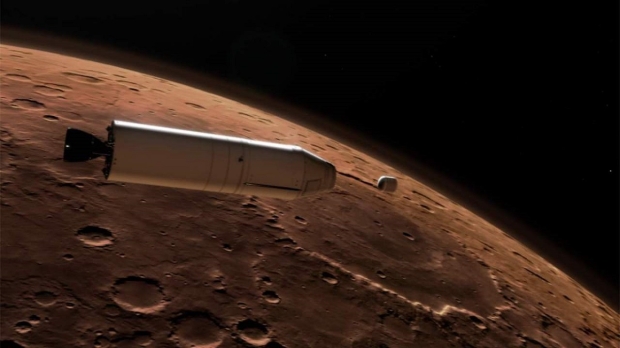