FTX, one of the world's largest cryptocurrency exchanges, has announced an addition to its planned Super Bowl advertisement.

The cryptocurrency exchange took to Twitter to announce that it will be giving away free Bitcoin to four lucky winners who retweet the pinned post on the FTX Twitter account. FTX details that the four randomly selected winners will split a total number of Bitcoins when the ad airs at the Super Bowl in the Eastern Time (ET) zone. The exchange notes that it doesn't actually know how much Bitcoin it will be giving away as the price, at the time of writing this, is increasing quickly.

According to the official guidelines by FTX, "Each winner will receive Bitcoin deposited into their FTX account. The amount of Bitcoin to be deposited will be equal to the ET time (hour and minute) that Sponsor's February 13, 2022 television commercial begins to be aired on NBC." For example, FTX's Super Bowl advertisement is scheduled to play during the second, and if it plays at 9:15, it will give away 9.15 Bitcoins to the winners, where they split the total four ways. 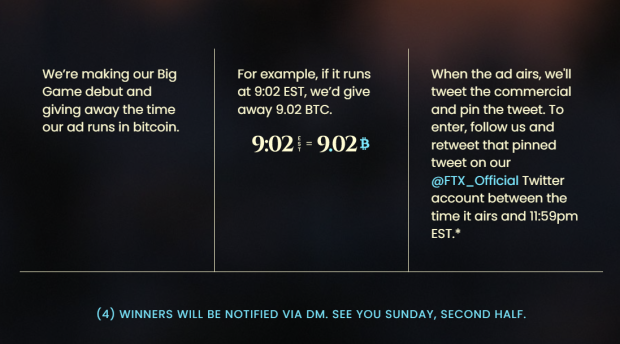 The Cincinnati Bengals and Los Angeles Rams will play on February 14 at 6:30 pm. To read more about the rules, check out this link here.