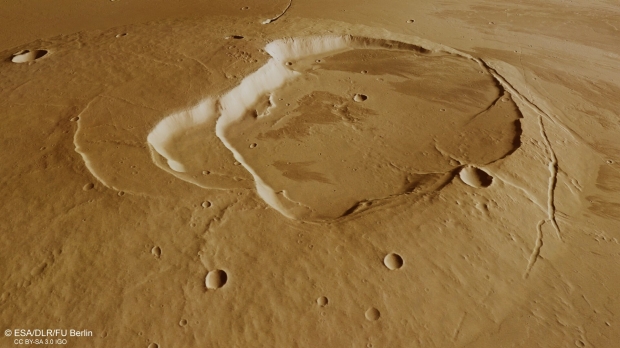 The Mars Express is a space mission launched in 2003 and operated by the European Space Agency (ESA). Now, it has observed the Jovis Tholus shield volcano on the Martian surface, spotting numerous craters peppering the volcano's caldera. Jovis Tholus peaks at 2,990 meters and spans about 58 kilometers. Slightly off to the east of Jovis Tholus, given away in the color-coded topography image below, is a less-developed volcano causing the surface to bulge somewhat.

A large impact crater is found to the north of the volcanoes, spanning 30 kilometers in width. The impactor, an asteroid or comet, likely struck water or ice-saturated ground, indicated by the fluidized nature of the ejected material around the crater and the fractured floor within the crater. What appears to be an outflow channel along the fault line to the northwest of the crater provides further evidence that this was a watery region in the past.