AT&T added over 13 million subscribers to HBO Max and HBO throughout 2021, close to Netflix's adds. 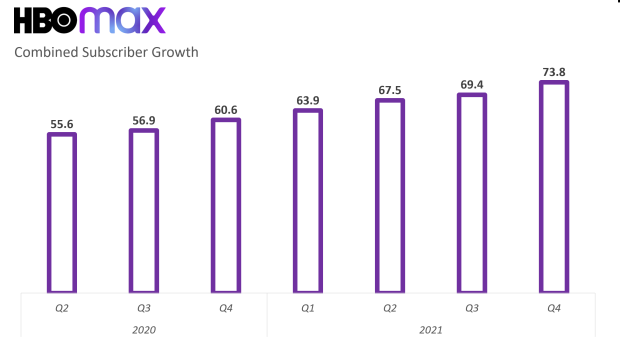 AT&T just reported its Q4 and full-year financials that outline revenue and subscription growth across the company. Throughout its WarnerMedia entertainment branch the company added a combined 13.1 million subscribers across HBO and HBO Max--the largest surge in paid premium subscribers in the history of the service.

These numbers aren't too far off of Netflix's paid adds, which totaled to 14.2 million throughout 2021. Netflix still has a commanding lead with 221.8 million active paying subscribers versus HBO Max's 73.8 million.

HBO Max and its associated properties are a big catalyst for the Discovery-WarnerMedia merger, which will see two of the biggest entertainment companies combine in a megadeal that could shake up the streaming wars.

"Coming off an outstanding year with HBO Max, we plan to hand off the business with a strong exit velocity, and we look to further our international

"When the deal closes, the investments made in both content and HBO Max growth, coupled with strong execution by the team, will ensure Warner Bros. Discovery is positioned as a leading global media company with the depth of content and the capabilities required to lead in the next era of media."