What was once believed a dream is coming to reality, or at least it kind of is with the upcoming release of the Jetson ONE.

A Swedish electric vertical take-off and landing vehicles (eVTOL) startup is planning on releasing an ultralight hoverbike inspired by the hoverbikes seen in Star Wars: Return of the Jedi. In October last year, Jetson released an incredible promotional video for the Jetson ONE, the company's first all-electric aircraft that it plans on bringing to market. The video showcases the aircraft that looks similar to a large drone that can be sat in, flying across a desert landscape that was deliberately chosen to create that sci-fi atmosphere for the viewer.

The Jetson ONE doesn't require the driver to hold a pilot's license as it falls under the Federal Aviation Administration (FAA) category of being an ultra-light vehicle which is defined by the vehicle being less than 254 pounds and a maximum speed of 63 mph. However, Jetson co-founder Peter Ternstrom told the BBC that he wants the first people that use the Jetson ONE to have currently or previously held a pilots license.

"If you have previous experience, we have said, 'OK, cool, you can buy one'," said Ternstrom.

The Jetson ONE costs $92,000 and offers 20 minutes of flight time from a fully charged battery, a maximum speed of 63 mph, and a maximum altitude of 1,500 feet. The aircraft is also equipped with padding around the pilot's seat to cushion any impact, an on-board software that will slow down the vehicle on descent based on how far away ground is. Ternstrom admits that things can still go wrong despite the previously listed safety implementations, hence the decision to only allow current and previous pilots to purchase the Jetson ONE. 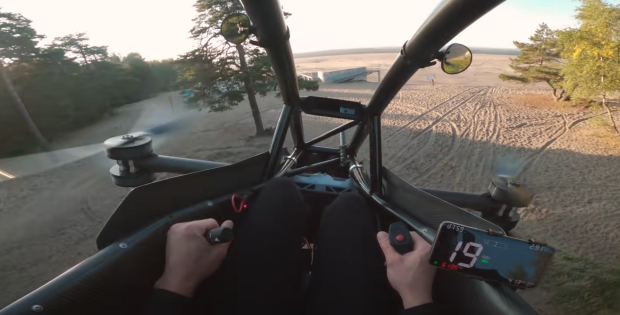 "This is a machine made for mischief, basically. I want them to be very responsible," he adds.

If you are interested in learning more about the Jetson ONE, check out this link here.