Krivicka has produced content for Netflix's "Sweet Tooth", Sony's "Spider-Man: Homecoming", Warner Bros.' "Geostorm," and many companies. This time around, Krivicka decided he was going to prank some unsuspecting New Yorkers into believing a doomsday comet was about to hit New York City. The prank included hundreds of extras, stunt people, and a multitude of hidden cameras both inside the office and out on the street.

The director explains to Space.com that this stunt was "by far the most ambitious stunt to date", and that the most challenging part was creating a doomsday atmosphere for the unsuspecting individuals when they couldn't see anything with their own eyes. To get the innocent victims believing it was real, Krivicka recorded a fake news report on the comet, and made sure the location was specifically tailored not to allow individuals to see outside each window. 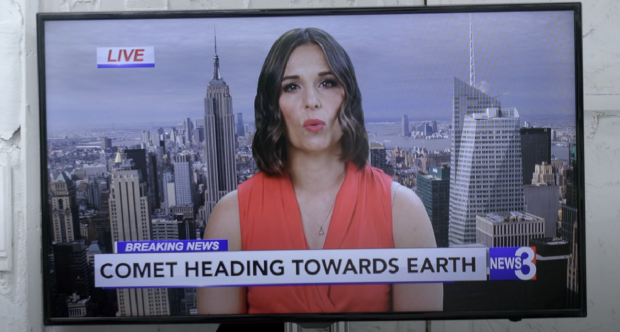 "When we pitched this stunt idea, we had no clue how complex the execution would become a few months later. This was by far our most ambitious stunt to date, involving hundreds of extras and stunt people, and capturing the action outside of the office with hidden cameras that were placed inside."

"It was an elaborate mindf--- created by connecting what they saw on the breaking news screen and what they saw outside: panicked crowds looking up at an imminent threat in the sky. It was a very complex scenario that involved a number of signals that had to happen in a very specific sequence. Our hidden camera control room felt like NASA's mission control center, but instead of landing people safely on a planet, we aimed to destroy our planet with a comet."

"Finding the perfect location was key, and after weeks of scouting we found it on Wall Street of all places. The space needed to have large windows with the perfect view, and the interior had to be large enough that we could transform it into an office with a control room in the back."

"We raised the floors of the entire office space to a specific height that worked for our stunt, so the seated marks would have a very specific field of view for each window. It was all about perspective - what you saw and what you couldn't see," Krivicka told Space.com.

Don't Look Up is now streaming on Netflix.