On January 15, an underwater volcano located in Tonga erupted, and the violent explosion was captured from a satellite in space.

The video posted by Space.com was captured by the GOES West Earth-observing satellite that's currently operated by the U.S. National Oceanic and Atmospheric Administration (NOAA). The above video showcases an extremely large explosion occurring, followed by a plume of smoke floating up into the atmosphere to an altitude of 12 miles.

The Hunga Tonga Hunga Ha'apai volcanic eruption immediately spawned a four-foot tsunami that hit Tonga's capital of Nuku'alofa that's located around 40 miles south of the volcano. Additionally, tsunami warnings and evacuation orders were issued for neighboring countries. The Associated Press has reported that there have been no injuries following the eruption, but added that Tonga's internet access was interrupted following the explosion.

Due to the lack of contact with the residents, Australia and New Zealand are sending surveillance flights to assess the damage. New Zealand Defense Force tweeted that an Orion aircraft departed Auckland on Monday and is headed for the volcano. ABC News reports that a C130 has departed from RAAF Base at Amberley in Queensland and is also headed for Tonga. 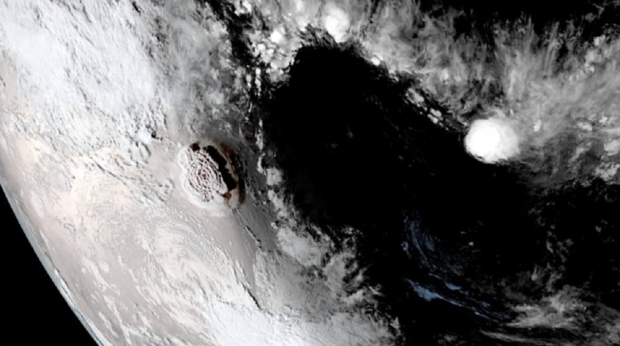