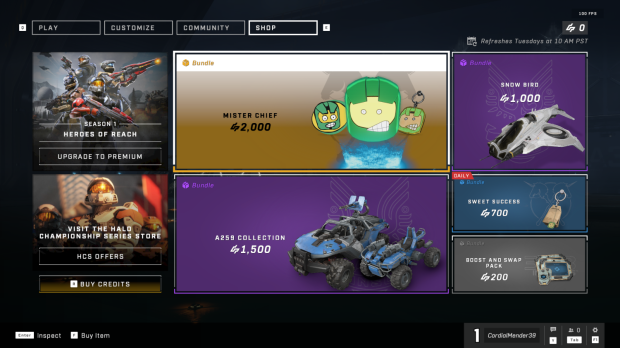 Halo Infinite has been over-monetized since it released on December 8. There have been $20 bundles that include paltry value with one piece of armor and other meager customizables (some didn't have any armor at all), and 343i was even charging $5 for basic armor colors. Now more than 41 days later, 343i says it will start dropping prices; the store will be adjusted starting this Tuesday, January 18, studio head of design Jerry Hook says.

"Starting Tuesday, the Shop experience will vary week-to-week. We are focused on reducing pricing across the board, providing stronger values in our bundles, starting to put individual items outside of bundles, and more," Hook wrote on Twitter.

The design head also says 343i will be experimenting with monetization throughout the coming months, but there's really no need for this. Blanket price reduction is what gamers have been clamoring over and a significant portion of Infinite's controversies have been around microtransactions, the weird progression system, and the armor cores--all of which serve long-term monetization.

"We will be trying new things throughout the rest of the season so that we can continue to learn and improve for the future. Please keep the feedback coming during this process."

Microsoft have collected untold millions from the game's cosmetics over the past few months. Sadly we may never know exactly how much Infinite's bundles and piecemeal purchase have made.

Halo 5 made $1 million from its REQ Pack lootbox microtransactions two months after release.

Halo Infinite, however, is a free-to-play game that was released on two generations of Xbox consoles as well as PC. That's a much wider net to catch whales with.