All NewsBusiness, Financial & LegalCases, Cooling & PSUContests & GiveawaysCPU, APU & ChipsetsDealsDisplays & ProjectorsGamingMotherboardsScience, Space & RoboticsStorageVideo CardsVirtual & Augmented Reality
All ReviewsAll ArticlesAudio, Sound & SpeakersCases, Cooling & PSUCPUs, Chipsets & SoCsComputer SystemsDisplays & ProjectorsGamingMotherboardsNetworkingPeripheralsRAMStorageVideo Cards
GuidesGamingAsk the ExpertsNewsletterAboutForums
RTX 3090 TiRTX 4090Diablo 2GTA 6Halo InfiniteElon MuskRTX 3080HDMI 2.1
This week in Taipei, both the 2007 WiMAX Forum and the IP Comm Asia show is on and TweakTown paid both shows a visit to see what was new. WiMAX is getting closer to become a reality by the day and Intel talked about it at IDF Taiwan earlier this month and there are several hundred test networks already up and running. The biggest hurdle is not the hardware implementations as you'll see from the pictures from the show, but rather to set it all up and make all the various parts and components to talk nicely with each other. 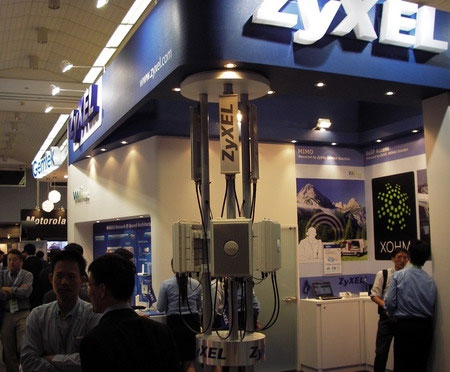 It's funny that WiMAX stands for Worldwide Interoperability for Microwave Access, since there are already issues with the various frequencies used as there's no global standard, although it seems like three different frequencies are currently being worked on, 2.3GHz, 2.5GHz and 3.5GHz. This doesn't mean that these are the only frequencies that will be used and there are talks about using the free 5GHz band as a backhaul channel for data as well as the use of a 3.3GHz spectrum in some countries.

There were devices on display at the show that works with just one or all of the three approved frequencies and it's mostly a matter of size when it comes to what will be supported by a specific device. Intel and several other manufacturers have already developed WiMAX cards which are half size Mini PCI Express cards and you can see a selection of those and some standard sized Mini PCI Express cards on the picture below. 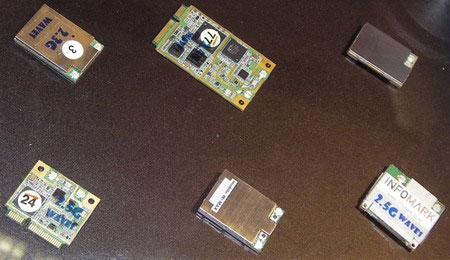 Even smaller devices will be required if WiMAX is going to make it into smaller handheld devices or mobile phones, but Samsung already has some devices using a derivative of WiMAX in Korea called WiBro which is short for Wireless Broadband and this service is already up and running. WiBro is meant to be compatible with WiMAX, but again, this is something that isn't certain due to various technical differences.

However, the products we took pictures of at the Samsung booth were WiMAX only and consisted of a PC Card and an Express Card, both for notebook usage. Although it's a bit hard to see on the picture below, both cards have a small antenna that has to be folded out before they can be used.

Several other solutions were also on display and below are a selection of a pair of USB dongles as well as another Express Card. The various manufacturers had quite different approaches on the way that these things should be designed and we presume that the various devices will have different reach, just as with different Wi-Fi antennas. 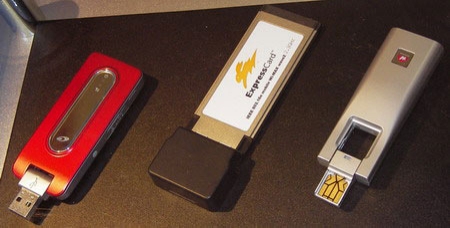 But WiMAX isn't just designed for users on the move, as it's also meant as a "last mile" solution and several manufacturers showed solutions for home users as well. Considering that the range of WiMAX is rated up towards 50km and the top speed should be hitting 70Mbit/s at close range to a base station, although initially it looks like 10MBit over 10km is the type of speed and range you can expect to see. Think of WiMAX as a long range wireless version of ADSL and you have a rough idea on what to expect.

ZyXEL had a big setup with a whole range of various devices for a wide range of uses on display, ranging from base stations to outdoor receivers all the way down to simple end users installable equipment and notebook cards. 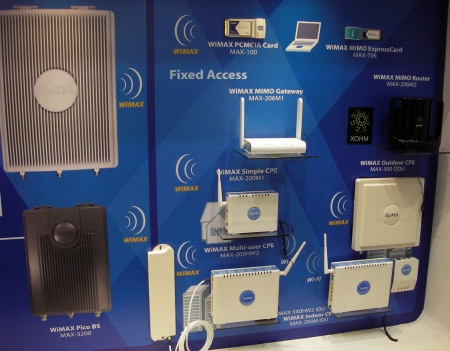 The interesting thing here is that ZyXEL was just one of many companies to offer such a wide range of products and to be honest, the only reason we picked ZyXEL to represent that infrastructure on show was because of the convenient setup of all their kit. None the less, as you can see from the picture, the base stations are rather large and these weren't even the biggest ones on display. Depending on how close to the transmitter you live, you might need to use an outdoors receiver to be able to use WiMAX at a decent speed and this equipment is most likely going to be quite a bit more expensive than the simpler routers.

In a bigger city where there should be plenty of WiMAX base stations, something like the device pictured below should be fine. What you're looking at is a combo router which connects to a WiMAX network and then allows you to connect 802.11n Wi-Fi devices or wired Ethernet devices to it. Interestingly a lot of the routers also incorporated telephone jacks, this time intended for your phone handsets so you could use a VoIP service and make calls via WiMAX. The six antennas do look a bit naff though, although we did see some slightly sleeker setups, but they all had loads of little antennas sticking out the top. 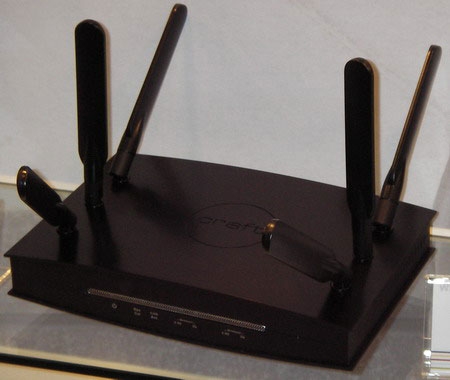 The more mobile version of WiMAX will appear in a lot of devices and as we mentioned earlier, Samsung has devices up and running in Korea, but Nokia showed a modified version of its N800 internet tablet that had been WiMAX enabled at the show. We'd expect to see a lot of devices of this size over the next couple of years that will start to incorporate WiMAX, the only problem is that most of them will cost about as much if not more than what most low-cost notebooks cost these days. The question is if people are willing to swap usability for portability when it comes to always on internet connectivity. 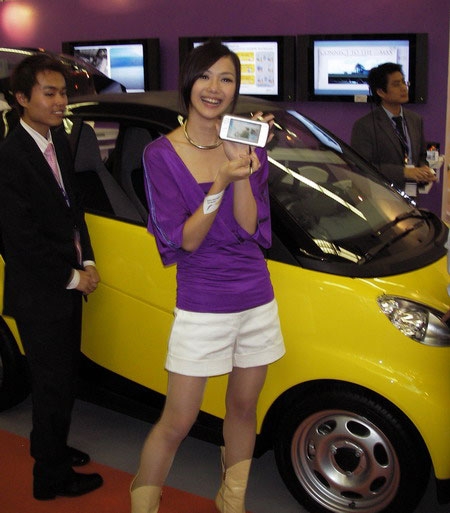 One rather cool device we saw though was the MTube or MicroTube which has been developed in Taiwan. It features a 1GHz x86 CPU, a 2.8-inch touch screen with VGA resolution and it measures no bigger than 85x85x20mm (HxWxD). Although we have no idea about battery life, this is the kind of device that should be possible and it's meant for things like video streaming and always on internet access. 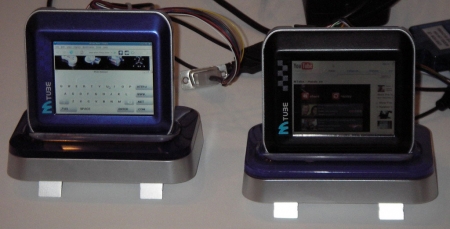 This being Taiwan, we also have to show you what they've thought up here as one of the usages for WiMAX, streaming Karaoke. Yes, you read that correctly, the video and audio would be streamed via WiMAX to a portable Karaoke unit and it could then be used on the camping trip or on the beach for example. Isn't wireless technology great? 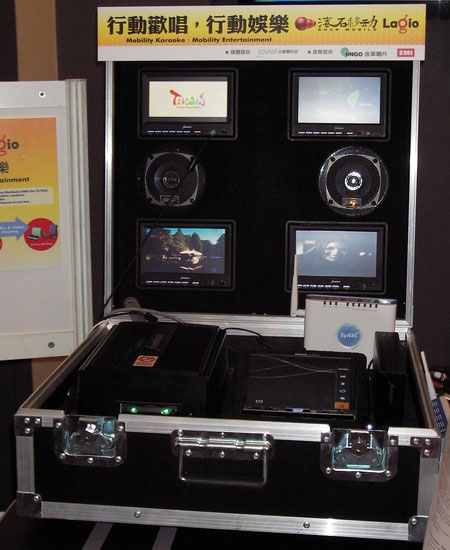 The only uncertainty about WiMAX and the one thing which could kill the technology dead is costs. As ISP's are increasing the charges for ADSL and imposing restrictions and limitations it seems like the always on always connected internet society is a long way away as yet. It doesn't matter how hard Intel and everyone else behind WiMAX pushes the technology if bandwidth restrictions will get stricter and you have to pay for every Kb used. Hopefully this is only a short term problem and WiMAX should cost less to implement than ADSL which might in turn allow the ISP's to loosen up the limitations they're currently imposing on so many of us. None the less, there are still countries in the world that doesn't impose any such restrictions and we can happily say that Taiwan is one of those.
Newsletter Subscription