All NewsBusiness, Financial & LegalCases, Cooling & PSUContests & GiveawaysCPU, APU & ChipsetsDealsDisplays & ProjectorsGamingMotherboardsScience, Space & RoboticsStorageVideo CardsVirtual & Augmented Reality
All ReviewsAll ArticlesAudio, Sound & SpeakersCases, Cooling & PSUCPUs, Chipsets & SoCsComputer SystemsDisplays & ProjectorsGamingMotherboardsNetworkingPeripheralsRAMStorageVideo Cards
GuidesGamingAsk the ExpertsNewsletterAboutForums
RTX 3090 TiRTX 4090Diablo 2GTA 6Halo InfiniteElon MuskRTX 3080HDMI 2.1
i-mate has announces two new Windows Mobile 6 Pro devices, the Ultimate 8502 and the Ultimate 9502. Let's start with the 8502, which is powered by a 400MHz Qualcomm processor, has 256MB of ROM and 128MB of RAM. The touch screen measures 2.6-inches and it has a standard 320x240 resolution. Apart from the rather high amounts of memory, nothing all that special so far. It's also got a 2 Megapixel camera with an LED flash, again, pretty standard.

However, this is a quad band GSM/GPRS/EDGE handset which also features tri band 3G, HSDPA and HSUPA connectivity. On top of this it has 802.11b/g Wi-Fi and Bluetooth 2.0 with EDR and A2DP support. Furthermore it has an integrated GPS, although there's no mention of what chipset is used. 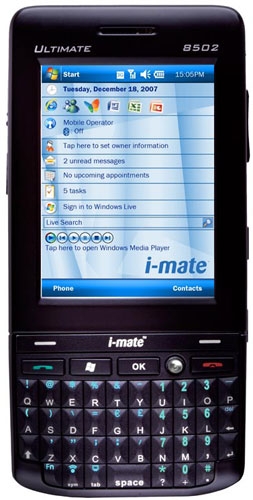 It's also got a 37-key QWERTY keyboard located below the screen and it has a side mounted jog wheel. Furthermore it has a combined video and audio out port which allows it to be connected to a TV or a projector. It has a 2.5mm jack for the supplied headset and a microSD card slot for memory expansion. The supplied battery should be good for up to 260min of talk time or 180h of standby time on a 3G network.

Not impressed? How about the 9502 then, well, it features the same processor and the same amount of memory, but it has a larger 2.8-inch touch screen and it sports VGA resolution at 640x480 pixels. Not enough? How about the fact that the screen slides up to reveal a QWERTY keyboard and turns it into a bastardised sidekick? Still not enough? 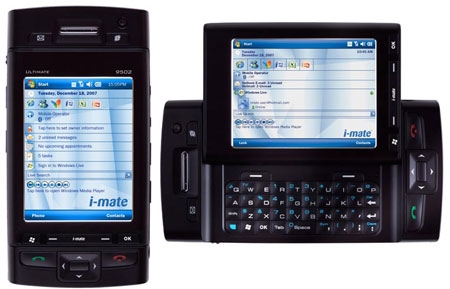 How about the addition of a 3 Megapixel camera with auto-focus and an LED flash as well as a front mounted camera for video calls? It also has the same network and data connectivity as the 8502 and it offers the same video out features, headset jack and microSD card slot. It even has the built in GPS unit and the jog wheel on the side.