ASUS has launched what it is calling the "world's first quad-band Wi-Fi 6E gaming router" with the introduction of their new flagship ROG Rapture GT-AXE16000 router.

ASUS is aiming its new ROG Rapture GT-AXE16000 at gamers, with the quad-band router inside handling 4 wireless bands. We have the high-end 6GHz band, 2 x 5GHz bands, and a single 2.4GHz band. Between the 6GHz and 2 x 5GHz bands, the ASUS ROG Rapture GT-AXE16000 router is capable of blasting 4804Mbps, dropping down into 1148Mbps on the 2.4GHz band -- but up to an insane 16Gbps aggregate throughput -- but don't expect that speed at home, but you'll get close-ish.

If you're serious about your Wi-Fi networking at home and want to set up the new ROG Rapture GT-AXE16000 with your ASUS AiMesh router, then you can do that -- and have an entire house filled with mesh networking. If not, the legacy 5GHz and 6GHz bands can be used as a backhaul if used with a compatible ASUS AiMesh router... a great feature right there. 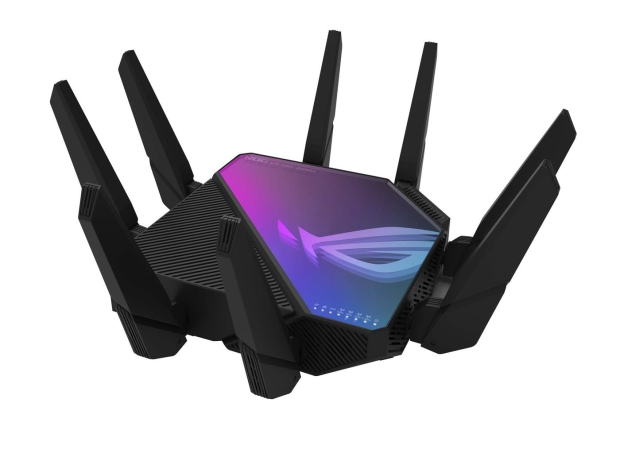 Wired networking is just as important, with ASUS equipping the ROG Rapture GT-AXE16000 router with super-enthusiast-grade 2 x 10GbE networking and 4 x 1GbE ports -- while the WAN port is ready for 2.5GbE connectivity. There are also some USB ports for connectivity, while the unit itself looks awesome with its spider-style aesthetics that ASUS has been using for a few years now on its flagship routers.