SEGA is doubling-down on PC gaming as one of its most popular franchises reaches nearly 3 million unit sales. 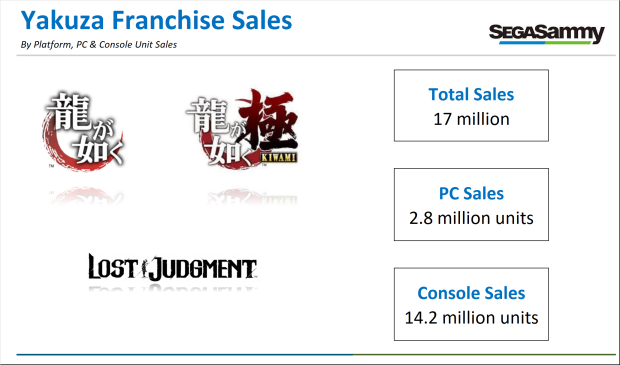 SEGA's Ryu Ga Gotoku series (known as Yakuza in the West) has sold 2.8 million units on PC, the company has announced in a December 2021 report. In a separate brief from November, SEGA confirmed the Yakuza franchise has sold 17 million units lifetime to date across consoles and PC; a quick bit of math shows that PC makes up roughly 16% of total series sales across all platforms.

SEGA has nine Yakuza games on Steam including:

"Due to the expansion of reach to users, as we started the support of PC platform with this series from FY2019/3, we recorded quite strong sales result with unit sales of approximately 2.80 million units worldwide," SEGA said in the report.

In 2020, SEGA pledged to release its games simultaneously on both PC and console in an effort to tap the growing PC market.

"Going forward, we intend to aggressively promote the porting of previously launched titles to Steam and other new platforms," SEGA President Haruki Satomi said at the time.

"Under such direction, we would like to take multi-platform roll-out in account and prepare the PC version and others from the start."