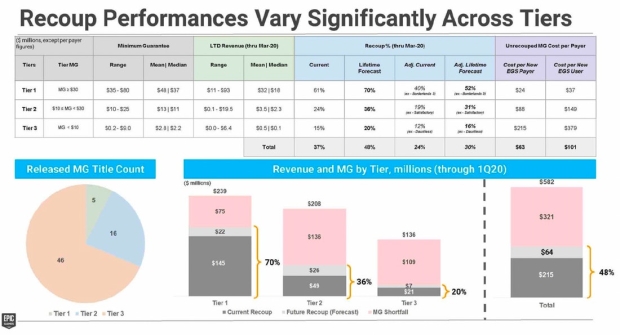 New data from the Epic vs Apple trial seems to indicate Epic Games is losing money betting on smaller indie games. While the Epic Games Store has yet to turn a profit--and isn't expected to until 2023--the company typically recoups most of the cash it spends on exclusivity deals for big games like Borderlands 3.

Smaller-scale games are a different story. New data gleaned from the case suggests Epic is losing money on what it refers to as Tier 3 games (example: free-to-play RPG Dauntless). The company is spending more on its minimum guarantees--what it will pay out to developers regardless of how well a game sales--than it is earning on actual game revenues. Minimum guarantee losses made up 80% of tier 3 revenues for the quarter.

Epic has made more Tier 3 minimum guarantee deals than any other tier, and therefore has also lost more on these smaller games than any other tier. In Q1'20, Epic Games only recouped 20% of its minimum guarantee spending on Tier 3 titles versus a mighty 70% on Tier 1 games. In total, Epic Games made back less than half of what it spent on these deals. 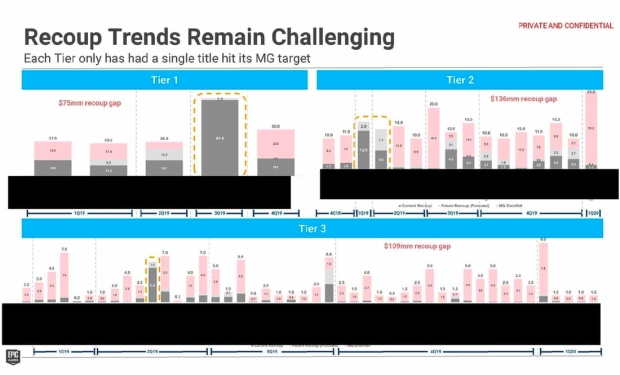 The first titles published by Epic's new label are multi-year games from big-name companies Remedy, including Alan Wake 2 and Alan Wake Remastered. Epic pays for 100% of dev costs, go-to-market costs, and much more, in exchange for a 50/50 profit share. Control, another Remedy game, remains one of the most popular games released on the Epic Games Store.

So what does this mean? Epic may pivot more away from smaller indies and make minimum guarantee deals on a more select case-by-case basis, while reserving more guaranteed hits for its publishing division.