NASA recently achieved a milestone with its Parker Solar probe as it's the first spacecraft to have ever entered the Sun's atmosphere.

NASA announced the news via its blog and social channels, stating that the Parker Solar probe has passed the boundary that marks the edge of the Sun's atmosphere, which is known as the Alfven critical surface. Before the probe passed this boundary, researchers didn't know its exact location, but after the solar probe entered the Sun's atmosphere, NASA can estimate that the boundary is anywhere between 4.3 to 8.6 million miles away from the surface of the Sun.

The Parker Solar probe is flying through the Sun's upper atmosphere, and during its fly-by, it's taking samples of particles and performing readings of the magnetic field throughout the unexplored region. Additionally, video footage of the approach showcases the probe flying past structures called coronal streamers, which were only viewed from afar until now.

"Passing through the pseudostreamer was like flying into the eye of a storm. Inside the pseudostreamer, the conditions quieted, particles slowed, and the number of switchbacks dropped - a dramatic change from the busy barrage of particles the spacecraft usually encounters in the solar wind," stated NASA.

NASA announced that the Parker Solar probe is the first spacecraft to "touch" the Sun. 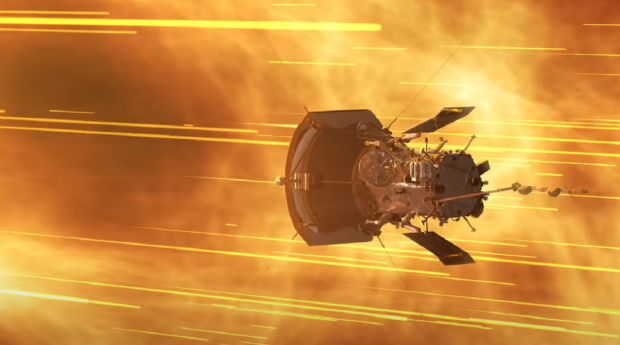