Meta released the Meta Avatars SDK 9.0 on December 10, and with the new release, all Unity developers can implement the new avatar system. 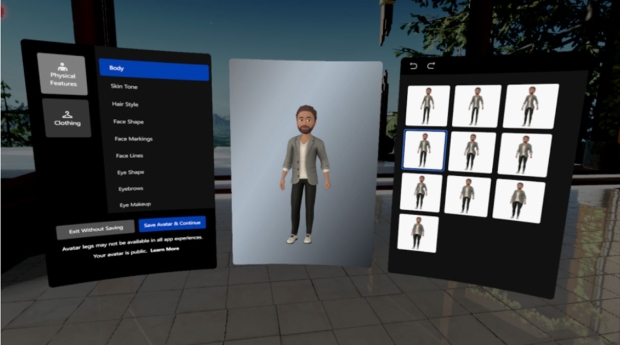 Meta's new Meta Avatars SDK fully overhauls the previous avatar system. This is the fourth iteration of the avatar system from Oculus/Meta. When the Rift first launched, avatars were monochrome silhouettes. When Oculus launched the Go, it added color to the avatar system. Then with the launch of the original Quest, we got slightly more realistic avatars that included mouth animations for better communication.

The new avatars have a more cartoony art style, but with support for body-tracking to bring more expression to your digital self. The Meta Avatar system uses a custom IK (inverse kinetics) algorithm to interpret hand and controller movement and a facial animation system driven by the sound of your voice. In addition to the cosmetic overhaul, the new Meta Avatar system gives you a persistent digital persona that represents you in all Meta content. The Meta Avatar system has been used for several months by select developers. PokerStars VR, GOLF+, Epic Roller Coasters, Synth Riders, and ForeVR Bowl have been part of a private beta since Aprilthat supported the new avatars. Now, any developer working with Unity can add support for Meta Avatars.

The Meta Avatar system is available now as a Unity plugin to make implementing the new avatars into Unity games as simple as possible. Meta said the SDK includes 32 sample avatars, which you can further refine and customize to your liking.

For more details about the Meta Avatar SDK, you can find the release notes at developer.oculus.com.