Intel is just getting its new 12th Gen Core "Alder Lake" CPUs onto shelves and into gamers' hands, with the 13th Gen Core "Raptor Lake" dropping in 2022 while the next-next-gen 14th Gen Core "Meteor Lake" CPU has some new details from fresh rumors. 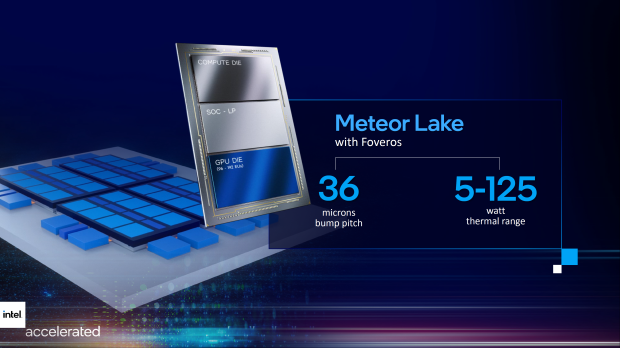 According to the Commercial Times, the new Intel 14th Gen Core "Meteor Lake" CPU will have a quad-tile design, which seems to point to the Meteor Lake CPUs having the GPU tile in the middle of the processor. There will be a CPU compute tile on top, and then on the bottom, we should find the SoC tile.

Intel will reportedly be using its in-house Intel 4 process which is launching in 2023, with Meteor Lake using a chip block design with some (but not all) of the chip blocks being built by TSMC. The new Intel 14th Gen Core "Meteor Lake" CPUs will integrate computing chips, graphics chips, and connection chips (SoC-LP tiles) into a single Intel Foveros advanced packaging technology.

Intel has reportedly trial-produced computing chips in Meteor Lake processors at its Fab 42 facility in Arizona, USA but the final processors will use a jointly-built design with the help of TSMC. Intel will use its Intel 7 process for the 13th Gen Core "Raptor Lake" CPUs while the Intel 4 process will be used for the 14th Gen Core "Meteor Lake" CPUs.

"The 14th generation Meteor Lake will adopt chip block design, and some chip blocks will be produced by TSMC".

"According to industry news and foreign media reports, the Intel Meteor Lake processor adopts a new chip design that integrates computing chips, graphics chips, and connection chips (SoC-LP tiles) into one through Intel Foveros advanced packaging technology. The news pointed out that Intel has trial-produced computing chips in Meteor Lake processors at Fab 42 in Arizona, USA, and will release chip foundry orders to jointly build the strongest processors with TSMC". 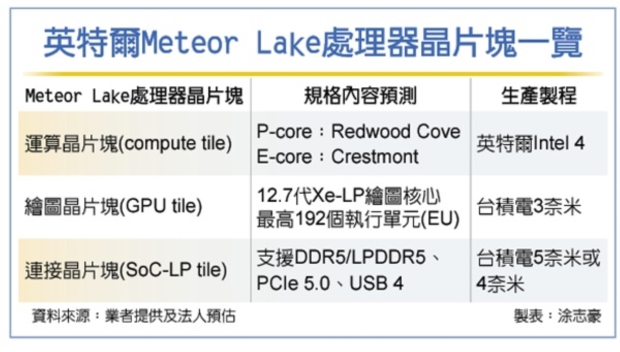 "Intel will use the Intel 4 process to produce Meteor Lake computing chips, including Redwood Cove performance core (P-core) and Crestmont efficiency core (E-core). As for the news that the graphics chip will be produced using TSMC's 3nm process, the connection chip is also expected to be handed over to TSMC".

"It is understood that Meteor Lake's computing chips will be finalized and trial production at the end of this year. The graphics chips and connection chips will be produced by TSMC before the end of 2022. Meteor Lake is expected to be launched in 2023".