AMD has a couple of new graphics cards are coming: the Radeon RX 6500M and Radeon RX 6300M, which will both feature the Navi 24 GPU. 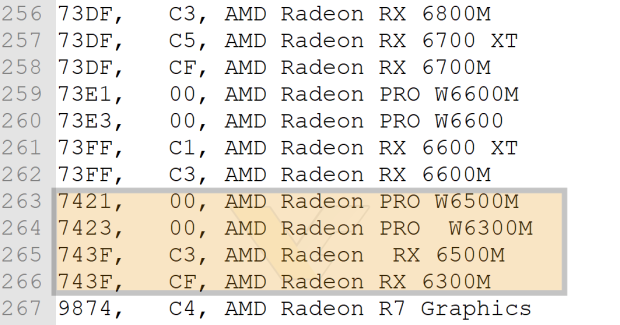 We have heard about the Navi 24-powered GPUs before from Tom @ Moore's Law is Dead, with the entry-level Navi 24 GPU taking care of at least 6 new graphics cards from AMD. We should see the Radeon PRO W6500M, Radeon PRO 6300M, and then gaming SKUs in the Radeon RX 6500M and Radeon RX 6300M.

These 4 graphics cards are expected to join the already-known Radeon RX 6500 XT and Radeon RX 6400 series desktop graphics cards -- also powered by the same Navi 24 GPU. What we do know about the Navi 24 GPU is that it has a PCI Device ID of 7420-743F which has been spotted in Linux kernel/driver leaks previously.

AMD's new cut-down Navi 24 GPU should have 16 Compute Units with 1024 Stream Processors, and should drop sometime in early 2022 -- at this point, we should see the new Navi 24-powered graphics cards to debut during CES 2022.