NASA is currently gearing up for its very first planetary defense mission that will include launching a spacecraft directly towards an asteroid in an attempt to redirect it.

NASA is targeting a binary asteroid system that features two asteroids; one smaller asteroid named Didymos and one larger asteroid named Dimorphos. Didymos, the smaller of the two asteroids, is orbiting its larger companion and will be the target of NASA's Double Asteroid Redirection Test (DART). The space agency plans to launch a vending machine-sized asteroid towards Didymos in an attempt to change its orbit slightly. The results from this test will answer the question if NASA is capable of redirecting an asteroid if it's on route to hit Earth.

The DART spacecraft will be traveling at 15,000 mph and will collide with Didymos, which is about the size of the Great Pyramid of Giza. NASA expects that the impact should change Didymos' orbit by more than 1%, and if it does, the mission is considered a success. As the DART spacecraft is flying towards the asteroid, it will be taking images rapidly and relaying them back to Earth before it's completely destroyed. 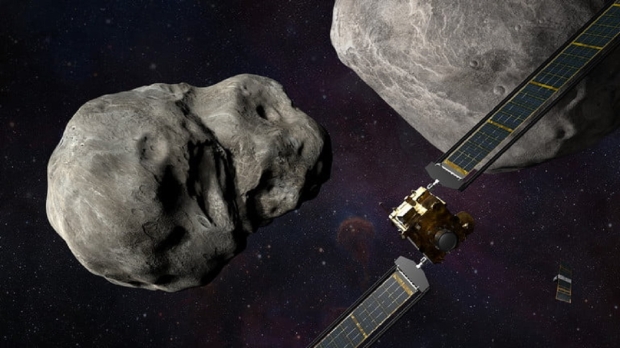 DART will launch on the back of SpaceX's Falcon 9 rocket from Vandenberg Space Force Base in California at 1:20 a.m. ET on Wednesday, November 24 (10:20 p.m. PT on Tuesday, November 23). The event will be live-streamed by NASA and can be watched above.