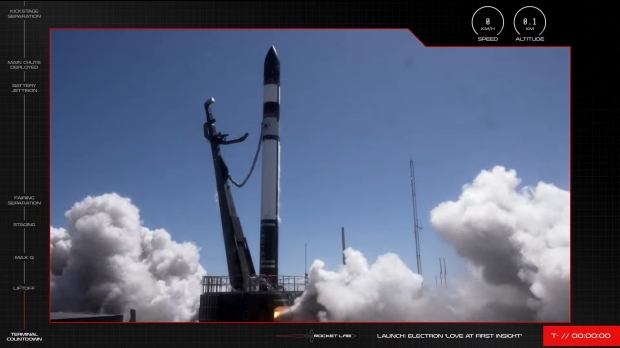 The launch took place from Rocket Lab's launch pad on the Mahia Peninsula of New Zealand's North Island. Lift-off occurred at 2:38 p.m. (1:38 a.m. UTC) local time on November 18th. The first stage of the Electron rocket was scheduled to parachute safely into the ocean, splashing a few hundred miles off the coast where it was to be retrieved by a Rocket Lab boat, with a helicopter flying in the area to help locate it.

Fifty-five minutes after lift-off, the rocket's upper stage deployed the two BlackSky satellites it was carrying at an altitude of 270 miles (430 kilometers). Rocket Lab plans to help launch four additional BlackSky satellites across two more Electron launches as per the deal signed between the two companies.

Previously in May of this year, a severe error in the upper stage of an Electron rocket resulted in the loss of the two BlackSky satellites aboard in Rocket Lab's 20th Electron rocket launch to date.

This mission is Electron's fifth flight of the year and 22nd overall, all of which used brand-new rockets. Rocket Lab plans to expand the helicopter's role in the recovery process to eventually collect the rocket's first stage as it falls through the sky, to then be inspected, refurbished, and reused.

Rocket Lab live-streamed the event on its YouTube channel, which can be viewed in its entirety here, with the mission dubbed "Love At First Insight."