NVIDIA's cloud gaming service GeForce NOW has multiple tiers, with the free tier offering a "Basic Rig" while the "Priority" tier comes with 1-month and 6-month access to "Premium Rigs" with "RTX ON". NVIDIA explains that you receive "Priority Access to Gaming Servers" with "up to 1080p to 60FPS". 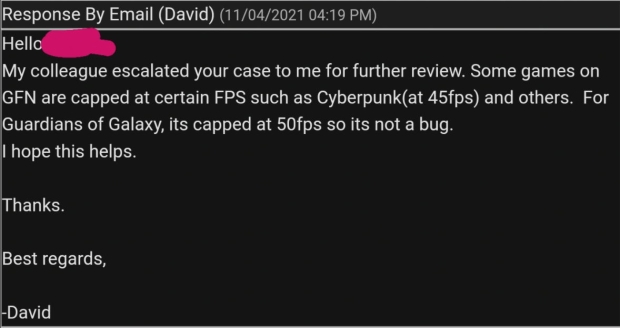 Well, that "up to 60FPS" is at the center of this nes with some gamers noticing that GeForce NOW under the Priority tier is pitting out games capped at 50FPS and even something like Cyberpunk 2077 down to 45FPS.

A post on Reddit had a Redditor asking NVIDIA customer support for his GeForce NOW membership, about Guardians of the Galaxy is capped at 50FPS, locked in the menu. NVIDIA said this is intentional, with NVIDIA explaining "its capped at 50fps so its not a bug". Cyberpunk 2077, as explained by NVIDIA support are "capped at certain FPS" noting Cyberpunk 2077 is capped at 45FPS. 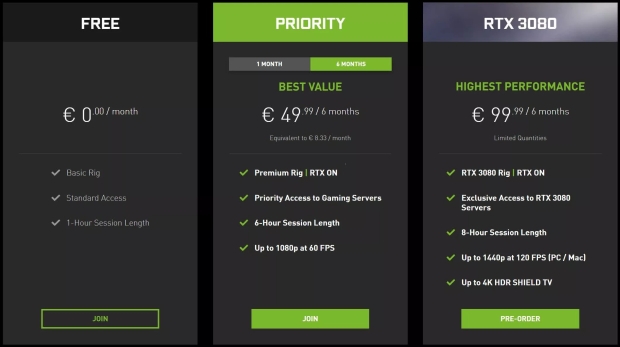 NVIDIA has since addressed the FPS gimping on GeForce NOW: "For our Priority Members, the maximum frames rendered per second is generally set to 60, or higher, for most of the 1,100+ games we've onboarded so far. There are some exceptions that we determined do not run well enough at 60 FPS on the GPUs used by Priority members. So the default OPS for these specific graphics-intensive games cannot be overridden. This is to ensure all Priority members are running a consistent, high-quality experience. However, we do continue to stream these games at 60 FPS".