A Spanish politician suggested a solution for the seemingly never-stopping lava rivers that are spewing out of the La Palma volcano. The volcano has been erupting for 42 days. 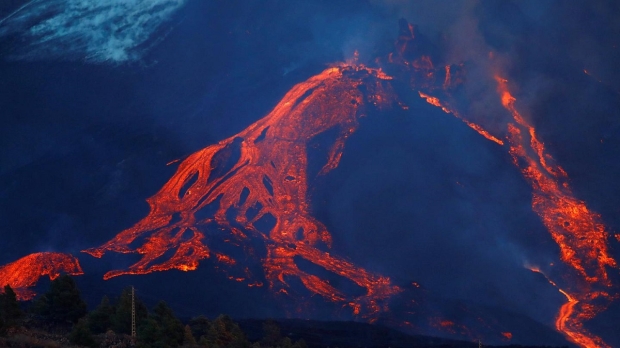 Casimiro Curbelo, the president of the municipal council of La Gomera, an island that neighbors La Palma, said that the lava rivers could be diverted to new locations through bombing runs made by an airplane. Curbelo made the statement during a debate on the Canary Islands' Radio Faycan where he said, "Isn't there a plane that could fly and drop [a bomb]? It arrives, drops and boom. And it sends the lava in a different direction?" Adding, "Maybe it's madness, but I get the impression from a technological point of view that it should be tried."

This suggestion of using bombs to divert the flow of lava has been made before, and attempts have been made. Back in 1983, a team of engineers placed 900 pounds of explosives near a river of lava that was erupting from Mount Etna. The idea was to create a new trench for the lava to move into and divert its original course away from a nearby village.

Engineers at the time deemed the experiment a success as the lava was diverted away from the village. However, the explosion resulted in a new split in the lava stream that caused new branches that many locals had to try and contain.

As for bombing La Palma's volcano, neither the Spanish Prime Minister Pedro Sanchez or Spain's military have responded to the suggestion made by Curbelo. For more information on this story, check out this link here.