AMD has just announced its new Radeon PRO V620 GPU which uses its new RDNA 2 architecture joined with a large 32GB of GDDR6 memory and will be destined for high-performance GPU acceleration for cloud workloads, immersive AAA gaming, huge 3D workloads and everything in between.

There's some impressive GPU-partitioning abilities, multi-stream hardware-accelerated encoders, and 32GB of GDDR6 gives the AMD Radeon PRO V620 GPU the ability to scale to multiple graphics users. This means that companies can save money on graphics acceleration for huge workloads.

Jeff Connell, corporate vice president, Visual and Cloud Gaming, AMD said: "AMD is bringing high-performance AAA gaming experience to the cloud with the introduction of the AMD Radeon PRO V620. We're seeing adoption of gaming in the cloud from customers around the world, taking advantage of the latest virtualization features delivering efficient and low latency content streaming to multiple simultaneous users. AMD Radeon PRO V620 is yet another proof point of AMD's excellence in gaming - from the PC to the console and now to the cloud". 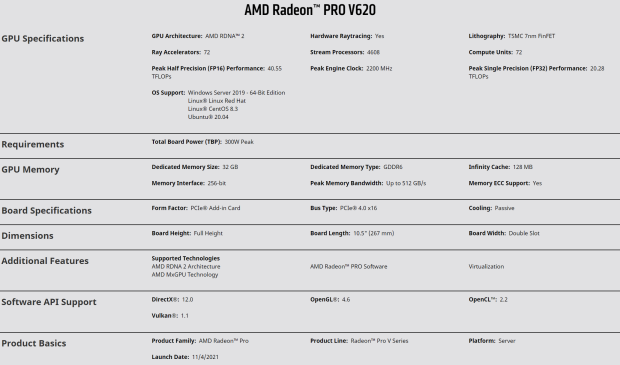 The new AMD Radeon PRO V620 GPU has up to 20.2 TFLOPs of compute performance, from its 4608 Stream Processors and 72 Compute Units.