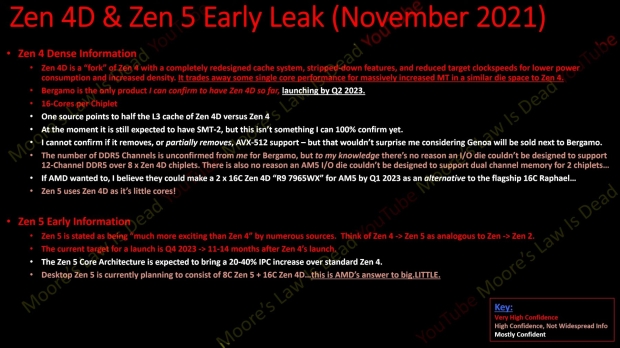 Alrighty... all of that, but it also "trades away some single core performance for massively increased MT in a similar die space to Zen 4". OK, you have my attention now... especially with the added tease that Zen 4D-based processors would have 16 cores per chiplet and DDR5 RAM support.

Tom says that AMD could make a 2 x 16C Zen 4D-based "R9 7965WX" processor for the AM5 processor in Q1 2023 as an "alternative to the flagship 16C Raphael" processor. But the big question is... if you didn't already know the answer: what is this new CPU going to be targeted towards? Intel's new Hybrid CPU technology.

Intel has shifted towards new microarchitectures, while AMD is redesigning its existing designs on new fabrication nodes. AMD saves many years of development time, and a considerable amount of money... and what comes from that is Zen4D and the first processor: the 128-core EPYC "Bergamo" CPU we've been hearing about.

So this news isn't "yeah, your next AMD Ryzen CPU is going to be 64 cores for $249" but rather AMD is going to totally waffle stomp all over Intel in the battle of big.LITTLE and its performance and efficiency CPU cores, with Intel's new 12th Gen Core "Alder Lake" CPUs featuring P-cores (Performance) and E-cores (Efficiency cores).

On the consumer desktop, AMD will deploy the Zen 4D and Zen 5 architectures in the Ryzen 8000 series desktops, while the Ryzen 7000 series CPUs on the desktop will be based the Zen 4 architecture.