Apple has really stepped it up with its next-gen M1 Max SoC that will power its new MacBook Pro laptops, with the new SoC being a game-changer for on-the-go video editing and graphics work.

Apple MacPro Product Line Manager, Shruti Ladea, as well as Luke Tristram, talked about the new M1 Pro and M1 Max SoCs on the podcast. Haldea explained: "One thing that is true about this architecture is that it delivers extraordinary performance, and so there are cases in which the M1 Max chip outdoes what Mac Pro can do". 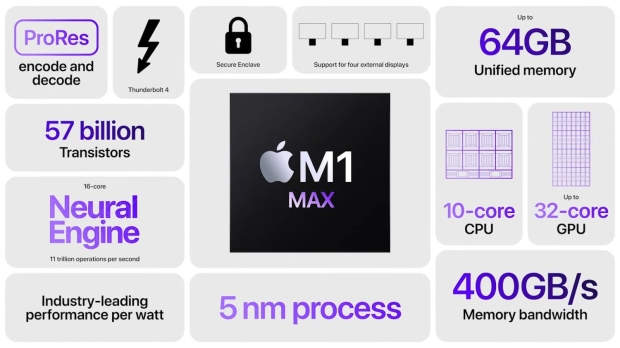 Haldea continues: "One example of that is, thanks to the ProRes accelerators that are built into the Media Engine, M1 Max has two of those engines for hardware-accelerated encode and decode, so as a result, you can run seven streams of 8K ProRes in Final Cut Pro on a 16-inch MacBook Pro with M1 Max. That's more streams than on a 28-core Mac Pro with an Afterburner Card, so you're literally out-doing a workstation".

Tristram added that the speed of exporting video was another boon for video editors, explaining: "You're just going to be able to get your projects rendered and exported so much faster. It is one of those times where you just, I think especially some who loves video, you just take a deep breath, it's just so exciting".