MSI is going to be offering something special on its MEG Z690 motherboards with a new feature called CPU Force 2, which will assist you in your journies overclocking your new Intel 12th Gen Core "Alder Lake" CPU. 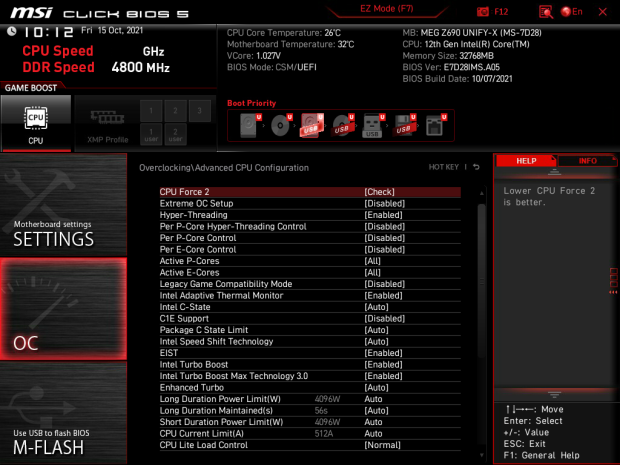 The next-gen MSI MEG Z690 motherboards will have both CPU Force 2 and Memory Force overclocking tools, which will help you with overclocking your Intel Alder lake CPU and DDR5 RAM. How does CPU Force 2 work exactly? Once you've installed your new 12th Gen Core "Alder Lake" CPU into the MSI MEG Z690 motherboard, you'll start with a score of 100, and CPU Force 2 will detect your settings and see how they fit, and then adjust the score.

The lower the score, the better -- so CPU Force 2 will detect your settings and provide a lower score, which means you'll have better stability and overclocking headroom in your new Alder Lake processor. If you've made adjustments and CPU Force 2 doesn't like them, then you'll get a higher score. This will come in handy with power consumption and voltage running through Intel's new Alder Lake CPU, but it's not a one-button OC tool that does it for you. 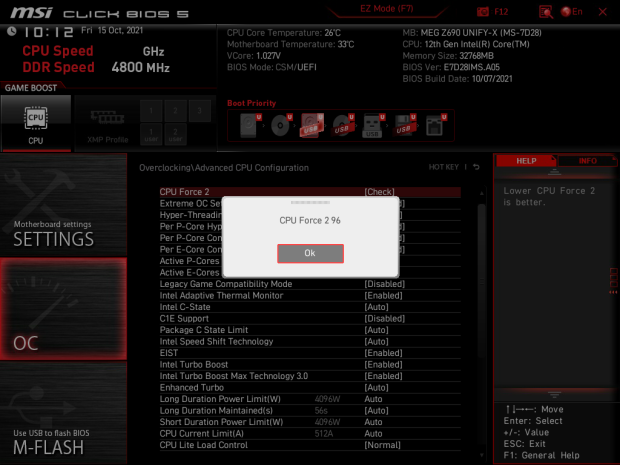 What would've been nice to see with Z690 is a complete overhaul of the BIOS itself, making it more like a mini OS that can either be easy to use, or have advanced features for power users, enthusiasts, businesses, governments, and so on. MSI's new CPU Force 2 seems kind of... useless... but that remains to be seen, I'd love to play around with the new feature on MSI's new MEG Z690 motherboard to judge it for myself.

But what CPU Force 2 will do, is help out in that journey of overclocking your Intel Alder Lake CPU -- kind of like a built-in CPU OC guide.