The first film crew to ever shoot footage that will be used in a feature film has safely returned back down to Earth, marking a milestone moment in the world film industry.

After training for just four months, filmmaker Klim Shipenko, actress Yulia Peresild, and cosmonaut Oleg Novitsky took off from Baikonur Cosmodrome in Kazakhstan to the International Space Station for twelve days. The space film crew shot scenes for an upcoming movie about a doctor that is sent into orbit to perform surgery on a cosmonaut that is in need of medical attention.

The space film crew safely touched down in the Kazakhstan steppes, and right after leaving the capsule, the landing site quickly became a film set for one of the film's closing scenes. Actress Yulia Peresild is the first actress in space and described her experience to RT, saying, "While you're in low gravity, you feel like a feather, so everything's very heavy now - my head's very heavy, my arms, my legs... Everything's a little dizzy." The mission was a joint effort between Russia's television Channel 1 and the Russian Space Agency.

The upcoming movie is titled The Challenge, and its plot, according to RT, "is shrouded in secrecy". For more information about this story, check out this link here. 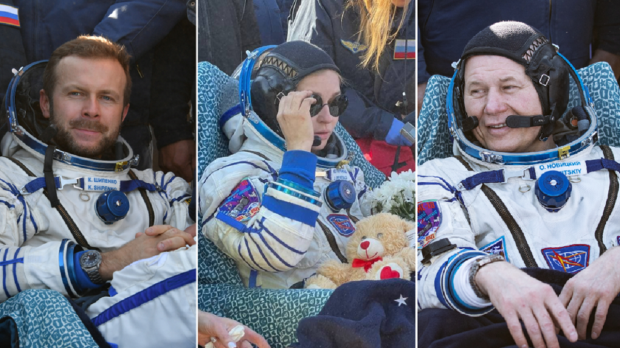