A close call is an understatement to 66-year-old Golden, British Columbia resident Ruth Hamilton, who experienced a terrifying ordeal on October 4 that nearly killed her.

Hamilton was asleep in her bed for hours when she was awoken by her dog barking, which was followed by a loud "explosion" sound. Following the loud "explosion" sound, Hamilton jumped out of bed and ran over to turn the light on. Only moments later, a large chunk of rock smashed through her ceiling. Hamilton flipped back her pillow and found a decent size rock laying in between her pillows, only inches away from where her head once was a few seconds ago.

The rock was initially thought to be from a construction site nearby that conducts blasting. However, it was quickly confirmed from multiple sources that a meteorite was seen exploding that same night. The meteorite weighed in at about two pounds, and according to Hamilton, she plans on keeping it after Western astronomy professor Peter Brown and his team finish analyzing it.

Brown said, "Everything about the story was consistent with a meteorite fall, and the fact that this bright fireball had occurred basically right at the same time made it a pretty overwhelming case."

Hamilton said, "I've never been so scared in my life. I wasn't sure what to do so I called 911 and, when I was speaking with the operator, I flipped over my pillow and saw that a rock had slipped between two pillows." Adding, "I was shaking like a leaf. You're sound asleep, safe, you think, in your bed, and you can get taken out by a meteorite, apparently." 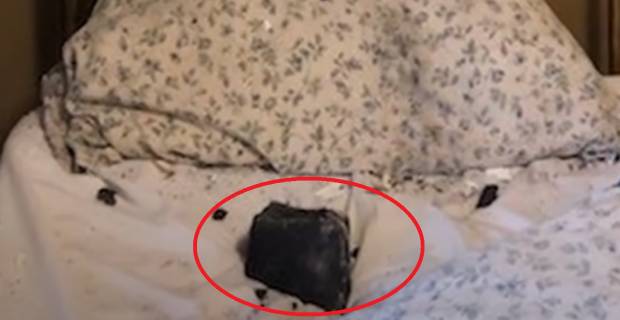