It might be hard to buy a new GPU right now, but for the most part the PC industry hasn't been too affected by the pandemic... but it appears the industry is slowing down a little, just a little. 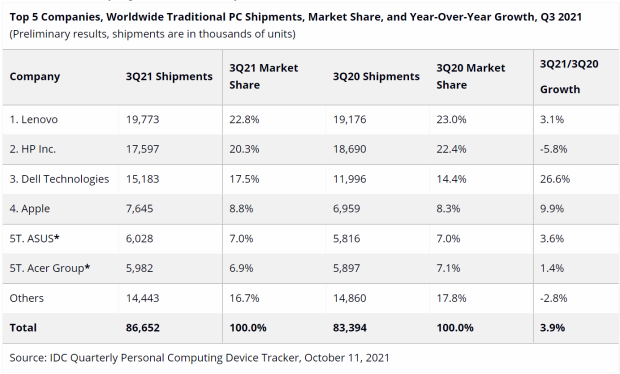 According to a new IDC report, there were over 86 million PCs shipped in Q3 2021. Now in these numbers they're including desktops, notebooks, and workstation machines with that 86.7 million PCs shipped being a 3.9% increase of 2020, with it being the 6th consecutive quarter that the PC has continued to grow.

But in the US, American PC users and gamers are getting hurt by shortages with Neha Mahajan, an IDC senior research analyst explaining: "Bottlenecked supply chains and ongoing logistic challenges led the U.S. PC market into its first quarter of annual shipment decline since the beginning of the pandemic".

"After a year of accelerated buying driven by the shift to remote work and learning, there's also been a comparative slowdown in PC spending and that has caused some softening of the U.S. PC market today. Yet, supply clearly remains behind demand in key segments with inventory still below normal levels".

Jitesh Ubrani, IDC research manager, added: "The PC industry continues to be hampered by supply and logistical challenges and unfortunately these issues have not seen much improvement in recent months. Given the current circumstances, we are seeing some vendors reprioritize shipments amongst various markets, allowing emerging markets to maintain growth momentum while some mature markets begin to slow".

The explosion in sales has been boosted by the pandemic, with many millions more people working from home seeing PC sales boost considerably. Shortages are also hitting at the same time for multiple reasons, with silicon shortages and low amounts of GPUs and other PC components around the world hurting supply right now.