The volcano located on Spain's Canary Islands has been erupting for weeks, and a satellite has snapped an incredible photo of it from space. 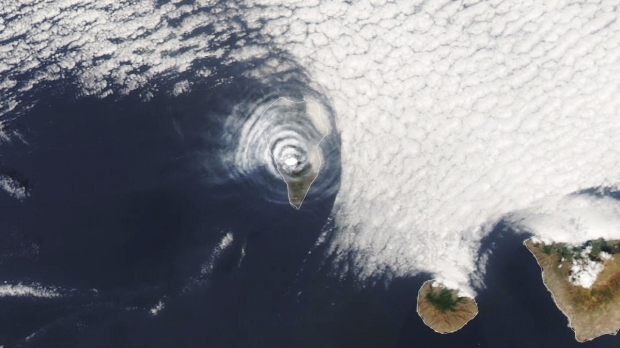 The eruption of the volcano on La Palma started on September 19 and has continued for weeks now, marking the first time an eruption has happened out of this volcano in more than 50 years. On October 1, the Moderate Resolution Imaging Spectroradiometer (MODIS) that is equipped on NASA's Aqua satellite snapped a crazy image of the clouds above the volcano as it passed overhead. The image shows concentric cloud rings that look very much like a bulls-eye.

According to NASA's Earth Observatory, the concentric clouds that can be seen in the image are a result of a rising column of superheated ash and gases, which is described as an "eruption column". Additionally, NASA explains that "The buoyant column of water vapor and other gases rose rapidly upward until colliding with a drier, warmer layer of air at roughly 5.3 kilometers (3.3 miles) altitude. The unusually warm air above-a temperature inversion-functioned like a lid, preventing the volcanic plume from rising any higher. Instead, it flattened out and spread horizontally."

Adding, "Since volcanic eruptions typically have natural ebbs and flows in their intensity, pulses in the upward flow of the volcanic column created concentric gravity waves as they hit the temperature inversion and spread outward. The process is similar to the way a stone dropped in a pond creates ripples that spread outward."