Facebook is down right now across the planet, as well as Facebook-owned services including Instagram and WhatsApp... but hours before, at the start of the day, Facebook stock started plunging. 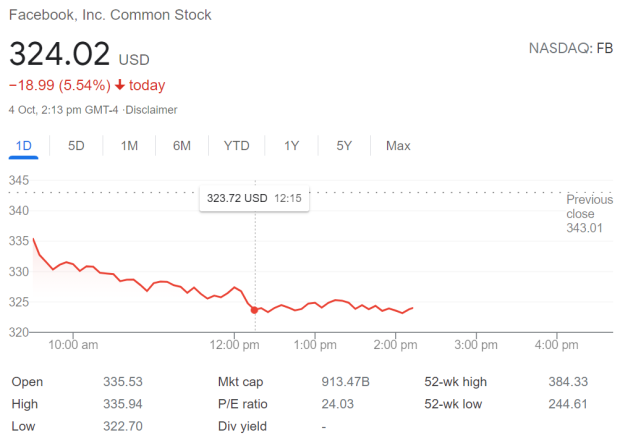 The price of Facebook stock started dropping because over the Facebook whistleblower in an interview with 60 Minutes that the social media giant puts "profits over people". Frances Haugen, who was the former product manager at Facebook revealed herself as the whistleblower behind the leak to The Wall Street Journal.

Haugen said that Facebook knew it was creating a dark online environment for teenage girls and said that Facebook used different rules for VIP accounts and that the social media giant also had a hand in the January 6 attack on the US Capitol building. Haugen said: "There were conflicts of interest between what was good for the public and what was good for Facebook. Facebook over and over again chose to optimize for its own interests like making more money".

Facebook has been pretty quiet about the issue so far, right after CEO Mark Zuckerberg uploaded a video of his wife, himself, and friends out on a yacht using his new Facebook Ray-Ban Stories glasses. Well, sorry Zuck but now we can't even watch that video you literally uploaded hours before your entire services went dark. Hopefully someone turns the light back on soon.