Microsoft has just unveiled its next-gen Surface Pro 8 which delivers upgrades in virtually all areas, and especially in its operating system department -- Windows 11. 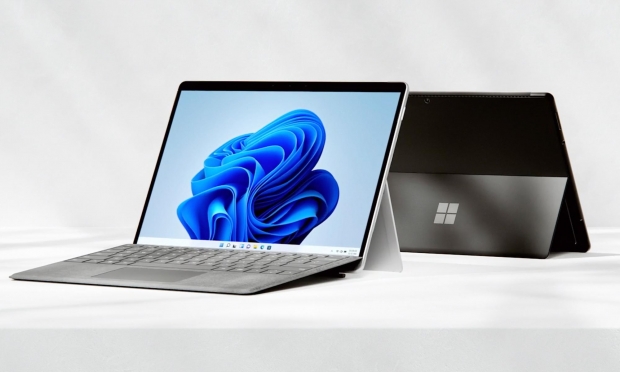 The new Surface Pro 8 features a lush 13-inch "PixelSense Flow Display" offering a smooth 120Hz refresh rate, a larger, faster display than any Surface Pro before. We also have Dolby Vision and Adaptive Color Technology on the display, with the Surface Pro 8 running at 60Hz by default, and only ramping to 120Hz when performing specific tasks or using the pen accessory.

Microsoft is tapping into the Dynamic Refresh Rate feature built into Windows 11 to increase battery life, because having the display at 120Hz the entire time would suck the battery down considerably.

You'll of course have a bunch of USB-C Thunderbolt 4 ports and a charging port with Microsoft's own Surface Connect port, with up to 32GB of RAM supported, and Intel's 11th Gen Core CPUs inside. Intel will be launching its 12th Gen "Alder Lake" CPUs in the next month or so, but the new Surface Pro 8 has the current-gen 11th Gen Core CPUs on offer.

Microsoft's new Surface Pro 8 has a new Surface Slim Pen 2 that you can put away neatly in the Surface Pro Signature Keyboard -- both separate purchases. The stylus being tucked away is a nice touch, making it a more portable workstation powerhouse with a pen, while the pen charges itself when it's plugged into the keyboard.

There's even a built-in haptic motor that responds to you pressing onto the display, creating more of a real pen feel.

Microsoft hasn't announced pricing or availability, but we do know that Windows 11 launches on October 5. Microsoft won't release its new Surface Pro 8 until Windows 11 is here, so we should see it launch in the second half of October.