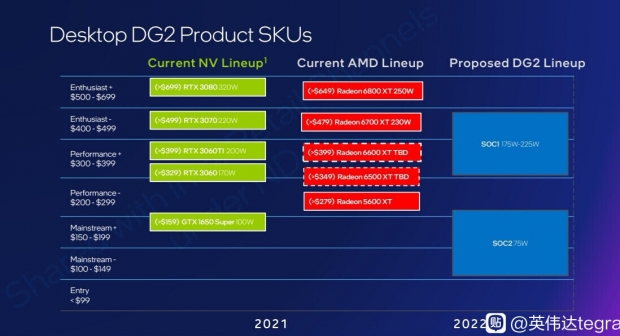 The new slides tease that the Intel ARC Alchemist will be in the upper mid-range GPU market, with SOC1 having 175-225W of power at its disposal and gets compared to NVIDIA's GeForce RTX 3070 and RTX 3060 Ti as well as AMD's Radeon RX 6700 XT and RX 6600 XT graphics cards.

Intel will have a lower-end SOC2 chip that would have up to 75W TDP making it compatible to the GeForce GTX 1650 SUPER, which will be priced in the $100 to $200 market. The higher-end Intel "SOC1" ARC Alchemist should be priced somewhere in the $300 to $499 market.