NVIDIA is gearing up for a big GPU refresh release in the coming months, with rumors that the company will be launching their new GeForce RTX 30 SUPER series in January 2022. 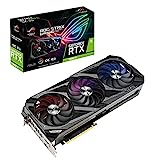