Researchers have observed for the first time a star consuming either a black hole or a neutron star, causing a supernova explosion. 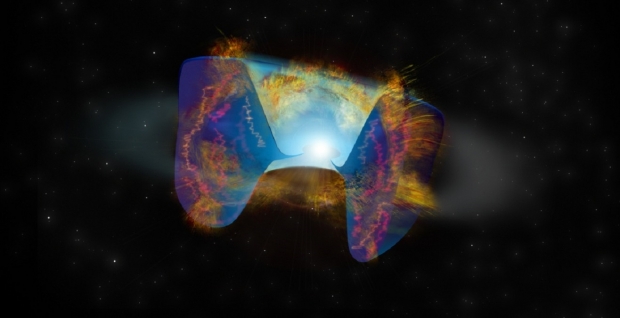 Researchers performed a survey with the Very Large Array Sky Survey and noticed that there was a bright source of radio emissions coming from a star-forming galaxy located 480 million light-years away. Dillon Dong, a graduate student at Caltech and lead author on a paper, said, "Theorists had predicted that this could happen, but this is the first time we've actually seen such an event."

Researchers believe that a star killed itself in a fiery supernova explosion, leaving behind either a neutron star or a black hole. As the years went on, a neighboring star was pulled closer and closer to the black hole or neutron star, eventually becoming consumed by either. The star being consumed was violent as all of its material was thrown out into the space around it, eventually reaching the core of the star. With no more fuel to burn, the star went supernova, shooting out a flash of X-rays that researchers detected.

"That jet is what produced the X-rays seen by the MAXI instrument aboard the International Space Station, and this confirms the date of this event in 2014," Dong said.

Gregg Hallinan of Caltech said, "All the pieces of this puzzle fit together to tell this amazing story. The remnant of a star that exploded a long time ago plunged into its companion, causing it, too, to explode."