Astronomers have successfully captured what is believed to now be the best view of matter colliding with the surface of a young star. 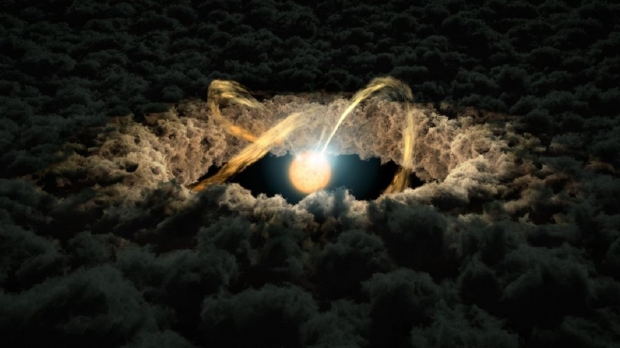 Catherine Espaillat, an astrophysicist at Boston University, spoke to Space.com and explained the process of a young star and how a local system of celestial objects can form around it. Newborn stars are surrounded by a protoplanetary disk of dust and gases, and from this disk, the objects that we commonly observe throughout the universe, such as moons, planets, and asteroids, are born. The star's magnetic field connects to this disk, as shown in the above concept image.

Espaillat is also the lead author on a new study that has examined the location on a star "where a star's magnetic field deposits protoplanetary disk material onto a star", per Space.com. Espaillat explains, "This footprint is called the 'hot spot,' since the material is very hot when it slams on to the surface of the star." The researchers concentrated their efforts on a star named GM Aurigae, as it's roughly the same mass as our sun, but is only about 2 million years old. Our sun is 4.6 billion years old.

What the researchers found that the visible light observed coming from GM Aurigae peaked in brightness a day after the ultraviolet light. The researchers suggest in their study that this can be explained by hot spots vary in density from its center to its outer edges, and that different densities influence the temperature of the surface.

Espaillat explained, "For the first time, we map the structure in this hot spot using observations and confirm theoretical predictions. This result teaches us more about what our sun looked like when it was young. Now our sun has sunspots, dark areas where the temperature on the surface is cooler. When our sun was young, it also had hot spots."