Intel's next-gen NUC is going to be an even bigger pocket rocket of portable PC performance, with the next-gen Intel NUC 12 Enthusiast teased with some damn good technology inside. 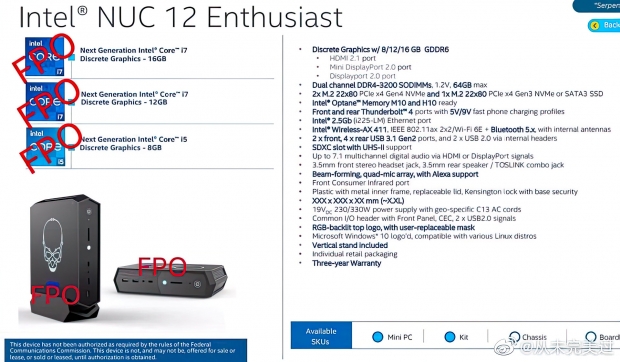 The new NUC 11 Enthusiast would be offered in multiple configurations, starting with an Intel Core i5 + 8GB GPU, Core i5 + 12GB GPU, and Core i7 + 16GB GPU. The GPUs in question are based on the Intel Xe-HPG DG2 family of discrete graphics cards, which are Intel's upcoming graphics cards for gamers.

Intel's current flock of NUC 11 Extreme PCs rock Tiger Lake CPUs and have the size inside for a full-sized graphics card, but the new Intel NUC 12 Extreme... well now, the Xe-HPG GPU with varying VRAM amounts and DisplayPort 2.0 which is capable of 4K 240Hz, 8K 120Hz, and 16K 60Hz? Hell yeah.

There's up to 330W of power on these NUC 12 Enthusiast PC beasts... which is kinda awesome to see.