The Supreme Leader of North Korea seems to be going through some health-related issues, something that the state media tightly controls any news of -- but recently, North Korea's main TV channel, Korea Central Television, had North Korean citizens concerned for Kim Jong-Un's health. 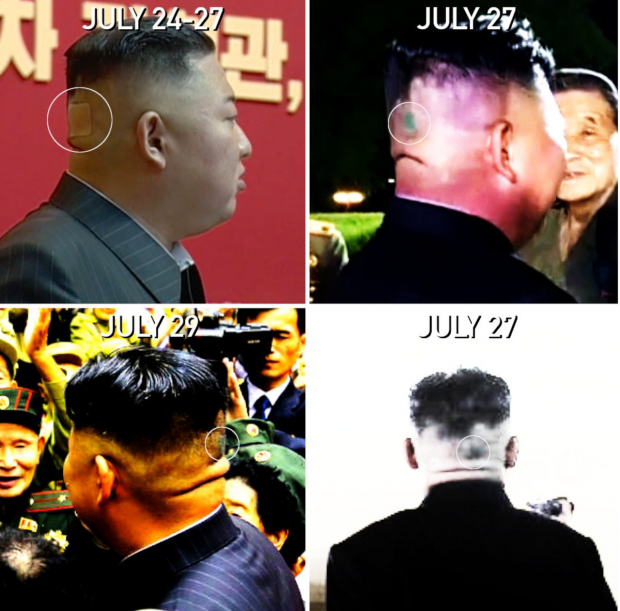 This was a month ago... and now, Kim Jong-Un has been spotted with a "strange green dark spot" on the back of his head. The North Korean Supreme Leader was spotted in recent public activities during the week, where there were some photos of him with a green dark spot, and another photo where it was covered up with a rather large bandage.

Kim attended a military event between July 24-27, and then again at a war veteran conference and other events between July 27-29. Before his last public meetings on June 29, Kim Jong-Un did not have these green marks on the back of his head, nor did he have them during his meeting with his favorite band -- the Band of the State Affairs Commission (SAC), a mixed orchestra and chorus band named after Kim's quasi-presidential office.

North Korean state media site NK News explains: "North Korean leader Kim Jong Un appeared with a dark spot on the back of his head during public activities last week - the latest health-related issue Kim has faced in recent years. The cause or nature of the large, dark green spot or bruise on the rear right side of his head, which was covered with a bandage in some footage, is still unknown and is difficult to diagnose using only images".

Kim's last appearance was on June 29, where there was no green mark on his head -- but then he took a two-week break in the middle of July... and when he re-appeared, the dark green mark was on the back of his head. Hmmm....

I'll just leave this here for a laugh.